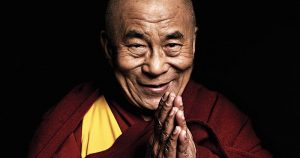 The Dalai Lama is a her to leftists across the globe, and yet some comments he recently made at a conference in Sweden may have many of his acolytes…confused.

Now, what he said is really quite reasonable and was delivered coherently and articulately.

And in a world that is not infused with hyperbolic, emotionally-charged definitions of what qualifies as “hate speech” and “white supremacy”, it may have even been controversial.

But if President Trump or Marine le Pen or Geert Wilders said the same thing, it would certainly be considered white supremacy.

The Dalai Lama, if you are unfamiliar with him, is sort of like the Pope of Buddhism. His writing and quotes are favorites of the spiritual-but-not-religious secular left, but they were likely unprepared for his latest tidbit of wisdom:

“Europe is for Europeans.”

While the former Nobel Peace Prize Winner sympathized with the plight of refugees and even said that Europe is “morally responsible” for helping those who are facing “danger against their life,” he stressed that the end-game should be the rehabilitation of their homeland, not migration to Europe.

“Receive them, help them, educate them … but ultimately they should develop their own country,” said the 83-year-old spiritual leader, who is himself no stranger to their plight, having fled the capital Lhasa to escape Chinese persecution – the communist country that has occupied the sovereign city of Tibet since 1950.

“I think Europe belongs to the Europeans,” he said. “They ultimately should rebuild their own country.”

France 24 reports that the Dalai Lama made his comments “three days after the far-right populist party Sweden Democrats made gains in the country’s general election on Sunday.”

“The anti-immigration party came in third, behind Prime Minister Stefan Lofven’s Social Democrats and the opposition conservative Moderates in the Nordic nation which in 2015 took in the highest number of asylum seekers per capita in Europe,” reports France 24.

The Dalai Lama has waded into these politically incorrect waters before. In 2016, just months before Trump’s upset victory, the spiritual leader said that “too many refugees” were pouring into Germany.

“Europe, for example Germany, cannot become an Arab country,” he told German newspaper Frankfurter Allgemeine Zeitung. “Germany is Germany. There are so many that in practice it becomes difficult.”

In the same interview, he suggested that Muslim Arab refugees should instead “rebuild their countries.”

“When we look into the face of every single refugee, especially the children and women, we can feel their suffering,” he stated. “The goal should be that they return and help rebuild their countries.”

No word yet on whether or not he has been seen donning a “MEGA” hat and tweeting about “tiger energy” and how “Buddhists don’t have to be Democrats.”