What Nancy Pelosi Said About “Impeaching With A Vengeance” Back In 1998 vs. What She Says Now 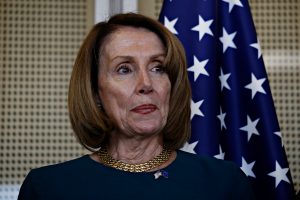 Unemployment was at a record low, everyone went to see Titanic, Viagra became available, and slews of women accusing President Bill Clinton of sexual misconduct were not believed but considered part of a “vast right-wing conspiracy,” and Nancy Pelosi called for restraint in clearly politically-charged impeachment proceedings.

While it seemed as though Pelosi was withstanding her party’s unending squawks for impeachment, the Speaker of the House has given her blessing to proceed with an impeachment inquiry over a phone call between President Trump and Ukranian President Volodymyr Zelensky, which Pelosi condemned after admitting that she had not even read the transcript of the phone call.

According to The Daily Wire, Speaker Pelosi’s words from 1998 about the ultimately successful impeachment proceedings against Clinton are being used against her now in light of the glaring inconsistency when stacked against her statements about impeaching Trump.

“Today, the Republican majority is not judging the president with fairness, but impeaching him with a vengeance,” Pelosi said on December 18, 1998 in a House debate on impeachment. “In the investigation of the president, fundamental principles which Americans hold dear — privacy, fairness, checks and balances — have been seriously violated. And why Because we are here today because the Republicans in the House are paralyzed with hatred of President Clinton. And until the Republicans free themselves of this hatred, our country will suffer.”

Here is the transcript of Pelosi’s full speech, via CNN:

Thank you. Today, the Republican majority is not judging the president with fairness, but impeaching him with a vengeance. In the investigation of the president, fundamental principles which Americans hold dear — privacy, fairness, checks and balances — have been seriously violated. And why?

PELOSI: Because we are here today because the Republicans in the House are paralyzed with hatred of President Clinton. And until the Republicans free themselves of this hatred, our country will suffer.

The first principle in our investigation of Newt Gingrich was that at the moment we found exculpatory information, it would be reported immediately to the accused and be made public.

The independent counsel knew that the president was exonerated with Travelgate, Whitewater, and Filegate and he held that information until the hearing, indeed until after the election. This was not fair. Indeed, it is the responsibility of any prosecutor to immediately release information that is exculpatory.

In the Gingrich probe, we drew every inference in favor of the accused. But in this case, it took a closing question from a member of the grand jury to Monica Lewinsky to say, “Is there anything you would like to add to your prior testimony?” for Monica Lewinsky to respond, and I quote, “No one ever asked me to lie, and I was never promised a job for my silence.”

The point is why didn’t the independent counsel elicit that important testimony? In the Gingrich case, we spent a major part of our report explaining the laws which were violated. The Judiciary Committee has not proven perjury, it’s not even defined perjury. Instead, it has kept the subject intentionally vague.

Whether one is violating a marital vow or some other aspect of his personal behavior, it is not an impeachable offense. You have not proven perjury.

In the Gingrich probe, we had a bipartisan unanimous vote in our subcommittee and an almost unanimous vote on the floor because we built consensus and we tried to bring the matter to closure.

My, oh my—notice a difference?