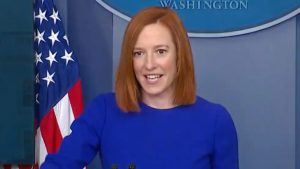 White House Press Secretary Jen Psaki was confronted with an extremely bad jobs report as it broke during an interview she was having on MSNBC Friday, giving the awkward answer that she couldn’t comment on the report for almost another hour.

Economists had expected to see more than 550,000 new jobs in the month of November, but only 210,000 were created, which suggests that the current labor market is still suffering from people who are hesitant to go back to work.

During her in-studio appearance on “Morning Joe,” Psaki said it was obvious that economic issues were the most pressing for Americans and Democratic proposals like the nearly $2 trillion Build Back Better bill would lower costs on a variety of issues.

Total jobs added were about 300,000 short of expectations. #JobsReport pic.twitter.com/dT8MtkdpDl

“Well, I know this sounds a little archaic, but I can’t comment on them until 9:30, by rules, because I work at the White House,” Psaki responded.

Brzezinski, noting Psaki couldn’t comment apparently for another hour, turned to Democratic strategist Adrienne Elrod to ask what Democrats could do more in order to “own” the economy.

So people are still “hesitant” to go back to work during the pandemic? Well, there are only two explanations for this behavior.

One, people are just too lazy to want to go back to work after the government gave them a ton of unemployment benefits, which were often more more than they got paid at their jobs, thus it makes more sense for them not to go back.

Two, folks are scared out of their minds because the propagandists with mainstream news outlets like MSNBC and CNN continue to push super scary COVID-19 narratives designed to control people through fear.

Either way, we can’t survive economically unless things change.