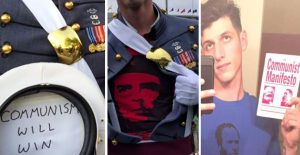 On Wednesday, the Daily Caller reported that West Point graduate Spenser Rapone, the Army 2nd Lieutenant who was caught promoting communism in uniform, was known by higher-ups at the academy for his anti-American attitudes and apparent support of the terror group ISIS.

Let that sink in for just a moment before you continue. A cadet at the United States Military Academy at West Point was a full-fledged Communist who hates America and justified ISIS terrorism is now an officer in the United States Army. And it appears the school had known about it for quite some time.

According to the report, Rapone was reported back in 2015 for publishing inappropriate and outright anti-American views online.

“From his various online rantings and posts, it appears that DCT Rapone is an avowed Marxist, which is completely out of line with the values of this nation and its Army,” Lt.Col Robert Heffington said in a sworn statement, which can be seen here. “Moreover, CDT Rapone’s posts indicate that he hates West Point, the U.S. Army, and indeed this country. One post dated 16 November 2015 states, ‘F*ck this country and its false freedom.’ He also … even implicitly justifies the actions of ISIS and blames the United States for terrorist attacks.”

“I cannot reconcile the image of a first class cadet at West Point with the things he has posted online for the world to see. To me, these are red flags that cannot be ignored, and I fail to see how this individual can possibly graduate and become a commissioned officer in six months,” Heffington concluded.

Read Daily Caller’s full report here, but it goes on to say:

Rapone made the news last week for his pro-communism tweets during the #VetsForKaepernick social media craze.

West Point’s Public Affairs office quickly released a statement last week condemning Rapone’s actions, saying that they “in no way reflect the values of the U.S. Military Academy or the U.S. Army… Second Lieutenant Rapone’s chain of command is aware of his actions and is looking into the matter.”

Multiple other sources contend that Rapone willfully put his anti-capitalist, anti-military and anti-American views on display for the world to see, both in person and over social media. Two recent academy graduates, when reached for comment, suggested that Rapone’s reputation at the academy preceded him. Although they did not personally know Rapone, they stated that they were aware of his radical leftist views and his rebellious reputation long before his activism hit the news this September.

The issue that is even bigger than a cadet espousing communist views while wearing a United Stated military uniform in which men and women have died fighting against communism in places like Vietnam is the higher chain of command which allowed him to continue doing so. It’s been reported that he felt encouraged to infiltrate the US military after being influenced by the traitorous actions of Chelsea Manning. Let that sink in!

We don’t need to look back too far to remember what happened at Ft Hood when Nidal Hassan killed 13 people in what then President Obama labeled “workplace violence.” Crossing ideologies leads to dangerous results. A US military member cannot, by definition, be a communist, Nazi, or jihadist.  Such allegiances are incompatible with military service in the United States.

He must be dishonorably discharged before he ever receives any form of military benefits.