Were We Really Listening? 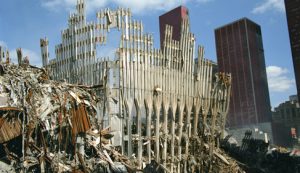 Only a few happenings in a nation’s history are momentous enough to change our lives. In the last century we’ve been left giddy, and we’ve been left in tears. Two events in particular, because of the shock and scope of the tragedy, truly shook the country’s foundation.

The first occurred on November 22, 1963 when President Kennedy was killed. America had pinned its hopes on the youngest man ever to take the Presidential oath of office, and his death left the nation stunned. Ask anyone alive at the time, and they’ll probably give you exact details about where they were and what they were doing when they heard about the assassination. The black and white images of those shiny limousines and the First Lady’s bloody dress are burned into the minds of those of us not even born on that awful day.

The second event occurred sixteen years ago. On September 11, 2001, 2,996 people died when jihadists carried out the bloodiest terror attack ever launched on American soil. More than 6,000 were injured. Those of us who remember that day will never forget seeing the second plane crash into the South Tower of the World Trade Center while we watched the North Tower burn.

The Falling Man came to define that day for America. The picture still gives substance to the helplessness we felt watching the buildings collapse, as well as the grief and rage that brought us all together for the first time since 1963. American flags flew all over the country, and even die-hard Democrats rallied around a President they had called illegitimate the day before.

We were able to sustain that unity for a while, but soon enough it was back to business-as-usual. American flags still flew, especially since our troops were once again in harm’s way, but the thread holding us together had worked loose before George W. Bush began his second term. Just nine years after the attack, we learned how much America had forgotten about one of the worst days in her history.

Today, 1World Trade Center stands with three other towers (a fifth one is planned), a performing arts center, the National 9/11 Memorial Plaza, and the National 9/11 Memorial Museum. In 2010, real estate developer Sharif el-Gamal decided another memorial was needed. He announced plans to build a fifteen story mega-mosque, cultural center, and Islamic museum just three blocks from where the Twin Towers once stood.

According to reports in the mainstream “news” media, those who lived in the immediate area supported the proposal. Michael Bloomberg, mayor of New York City at the time, argued vehemently in favor of it. The rest of the country, however, was less enthused, and the attacks were against all Americans, not just New Yorkers. Everyone had something to say about what happened at Ground Zero.

When protestors took to the streets, Mr. el-Gamal wasted no time crying that his freedom of religion had been violated. He failed to mention that no one protested the Muslim services held in the damaged building that would eventually be knocked down to make way for his dream. People demonstrated against a mega-mosque – a fifteen-story middle finger – standing tall and proud within sight of where 2,996 people lost their lives to satisfy the bloodlust of the religion’s most violent followers. Peaceful worshipers freely practicing that religion were never the problem.

If Mr. el-Gamal had simply wanted to build a mosque, he could have done it almost anywhere and faced little or no opposition. Freedom of religion is one of the pillars of our nation, and most people realize it must apply to everyone. We don’t have to agree with a religion’s teachings or even trust its adherents. If we’re to maintain the integrity and legitimacy of our Constitution, however, we have to afford them the same freedoms we expect and demand.

Self-governance requires each person to not only recognize but tolerate the needs and cultural norms of others. It also needs a healthy dose of common sense. Just about weekly we see stories of home owners told to take down their American flag or of schools banning Old Glory so that some group, often Muslims, won’t be offended. But anyone who doesn’t want to see a mega-mosque erected on the Ground Zero site is a bigot.

Prisons and schools have changed their menus to avoid violating Muslim dietary restrictions. Privately owned restaurants and grocery stores have been petitioned to ignore their other customers’ needs in favor of Muslim sensibilities. But anyone who doesn’t want to see a mega-mosque erected on the Ground Zero site is a bigot.

Recently, the 9th Circuit Court of Appeals ruled that a high school football coach can’t pray with his team on the field. Students are regularly prevented from praying or even mentioning God at their graduations. City and county governments have been forced to drop prayers that opened their meetings. Even the appearance, we’re told, of government endorsing a particular religion is improper and illegal. But, Mayor Michael Bloomberg was perfectly comfortable stumping for a mega-mosque at the Ground Zero site. And anyone opposing it is a bigot.

Thankfully, the protests worked. Mr. el-Gamal is building a luxury apartment building where his mega-mosque would have been. The forty-three-floor condominium will still house a cultural center and Islamic museum, but they will be much smaller. A mosque is not included in the plans.

All over the country today, Americans have remembered the victims and the heroes of 9/11 with moments of silence, prayers, and ceremonies. Many still can’t think of that day without wiping away tears. Part of honoring those who died is protecting the freedoms of every American while making sure the country never endures another day like that one seventeen years ago. Too many Americans seem to be trying to accomplish exactly the opposite.

Please, America, don’t let those 2,996 deaths be for nothing.