Welcome to America, Where You Don’t Need Stinking Laws! 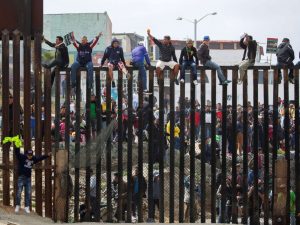 The remnants of the annual caravan of Central American migrants arrived at the U.S. border last week. According to Ireneo Mujica, one of this year’s organizers, the caravan officially disbanded when it reached Mexico City. He said the number of migrants, combined with the attention brought by President Trump’s criticism, made going all the way to the U.S. border too cumbersome.

However, four hundred of the group decided to continue on their own to Tijuana. From there, many have made the fifteen-minute walk to the San Ysidro checkpoint where, according to some media reports, everyone was turned away. The reality, though, is that Customs and Border Patrol officials are processing a certain number of asylum-seekers each day. The rest have been allowed to stay near the checkpoint, and the community has supplied them with blankets, food, and other necessities.

In a fit of biased, opinion-making propaganda designed to create sympathy for members of the caravan (to an extent that’s shocking even for them), CNN has declared all out war on our immigration system and the laws that ensure we remain a sovereign nation. And, all over the country, leftists are responding in kind. In fact, hundreds of supporters gathered on the U.S. side of the border to cheer the new-comers on.

The gist of their “argument” is, essentially, that no one should have to obey any laws which don’t make the left feel warm and fuzzy. Certainly, no one can doubt how the left feels about those mean and hateful immigration laws. So, for all of us deplorable troglodytes who just don’t get the nuances of leftist policies, here are some questions I hope can be answered by one or more of our more friends with an emotionally-based worldview. My expectations are low, but it’s worth a try.

First, does this new “warm-and-fuzzy” legal standard (for lack of a better word) apply only to immigration laws, or does it work for all federal laws? If, say, an employer didn’t feel all tingly hiring someone from one of the left’s victim groups, could she just ignore equal opportunity laws? Also, can the new standard be used to decide which state and local laws to follow?

Next, does the veracity of particular laws have an anticipated shelf-life, or does the standard shift as quickly as the emotions it’s based on? If it’s the latter, will those changes then occur by the minute? Hourly? Daily? Weekly? Monthly? More importantly, how will changes in which laws are acceptable and which are unacceptable be communicated? Are we simply to rely on the hive mindset the left is so intent on requiring for all Americans?

Those questions all lead to another one, which is will these “standards” be written down, kind of like the Constitution which, has, apparently, been deemed to hateful to serve as our country’s foundation. Or, more likely, would codifying these new rules so they could be objectively enforced be considered racist? Or sexist? Or homophobic? Or Islamophobic? Or, worst of all, Trumpish? And, as a side note, who voted to replace the Constitution with this more emotionally labile set of rules?

Come on, leftists. Give us a clue here, just a small insight. After all, you’ve spent nearly a decade telling those of us who refuse to drink the blue Kool-Aid how stupid and uniformed we are. Throw us a bone here, if you can. I double-dog dare you.