WEIRD: The Pentagon Has Confirmed ‘Pyramid’ UFO Video Was Taken By Navy 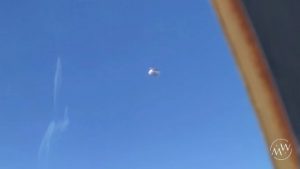 You know, every once in a while you just need to take a break from all of the bad news and the political nonsense happening the world and just examine something odd and strange.

We live in a weird world, you know?

It seems the Pentagon has confirmed that the infamous “Pyramid” UFO video and photographs floating around the Internet are legitimate, having been taken by the U.S. Navy.

“I can confirm that the referenced photos and videos were taken by Navy personnel. The UAPTF has included these incidents in their ongoing examinations,” Sue Gough, a spokeswoman for the Defense Department, told the Washington Examiner. “As we have said before, to maintain operations security and to avoid disclosing information that may be useful to potential adversaries, DOD does not discuss publicly the details of either the observations or the examinations of reported incursions into our training ranges or designated airspace, including those incursions initially designated as UAP.”

The website Extraordinary Beliefs said it had gained insight into an alleged classified “intelligence briefing” held on May 1, 2020, related to the study of UFOs through the Office of Naval Intelligence, and contended that briefing contained an estimated 10 videos and roughly a dozen photos documenting a number of unnamed aerial phenomena. In particular, the website referred to an “event series” from July 2019 “involving Strike Group 9 within the warning areas off of San Diego” where the USS Russell, an Arleigh Burke-class naval destroyer, “observed and recorded multiple ‘pyramid’ shaped craft.” A video of the incident appears to show a triangular object floating in the sky, and photos of the event appear to show more than one such UFO.

The outlet described a separate “event series” involving an FA-18 pilot and a weapon systems officer in the “warning area off the coast of Oceana” on March 4, 2019. The officer reportedly took the photos in the cockpit using his personal mobile phone, and “the intelligence briefing clarifies that the WSO captured THREE different craft on the same sorti with the same cell phone.”

So either we’re being visited by ET or the government is inventing all of this stuff to keep us unbalanced and distracted from the hack job they continue to do on the Constitution. What do you think?