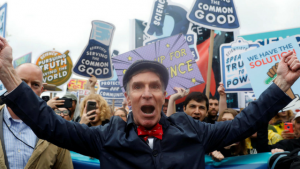 You probably missed it when pro-“science”, over-zealous leftists began gleefully planning their March for Science for last year, but you can be assured the event, as well as the propaganda leading up to it, was about as pretentious and ridiculous as you may imagine.

Well, the second annual March for Science happened over the weekend, and while the mainstream media desperately tried to convince us otherwise, it wasn’t really a big deal, although it was certainly worth a few yuks to follow the hashtag on social media. This was mostly because conservatives obliterated the entire premise that people who think a “fetus” isn’t alive or that a boy can be a girl if he just believes enough (and shoots up enough synthetic hormones).

Yes, it turns out the March for Science wasn’t really about science at all, but just another far-left whine fest to bash conservatives and complain even more about mean old Trump.

The Daily Wire’s Ben Shapiro, who can always be counted on to brutally undermine whatever high horse the left is riding on at the moment, described the march as “a sparse population of self-appointed guardians of Science™ [who] showed up in 200 cities around the world to march for it.”

So why were they marching, considering they’re not big fans of the science behind gender determination or the development of life in the womb? Why, diversity, of course! Hooray for intersectionality!

“The challenges are real for underrepresented students in science,” said Corey Welch, director of the STEM scholars program at Iowa State University. “We have to overcome the reality that few or no faculty share our identities or fully understand our situation on campus and how we have to relate back to our communities. … The diversity research clearly demonstrates bringing all the people to the table — to the scientific table — leads to better ideas, kinder, more ethical solutions, and always a more informed public policy,” Welch added.

It’s kind of sad that the organizers behind this march claim to both represent “science” and have strong opinions about how university faculty should be staffed and yet are completely unaware that what they were marching for is something normally reserved to the discipline of humanities, but whatever.

The entire march was, of course, based on the idea that you’re either a leftist or you oppose science. One Twitter user, irritated at the hilarious #MarchforLives tweets from conservatives, tweeted out what he obviously thought was a “gotcha” statement, that people who like their ideologically-driven arguments behind the banner of “science” love to use:

Hey conservatives mocking #MarchForScience. Log out of Twitter. Get off your phone or computer. Power down AC, refrigerators and TVs. Flip off the lights. Stop taking medication or supplements. Pee and poop outside. No driving cars either. Show science who’s boss. ‘Merica.

“This is, objectively speaking, idiotic,” writes Shapiro. “Opposing a March for Science on the grounds that it doesn’t actually forward science doesn’t mean that you oppose science. It means you oppose benighted virtue signaling that has nothing to do with science. I’ll be happy to give up my cell phone when Mr. Best can show me how marching for science achieved the development of the cellphone rather than scientific research taking place mainly within a competitive market environment.”

Or, there’s the simple litmus test for one’s grasp of science: