“We Are Not Starbucks”: Dunkin’ Donuts Refuses To Get Political, They Just Want To Sell Donuts 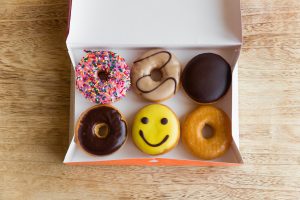 As riveting an experience as it is to go into an establishment to grab coffee and a bagel and walk out feeling alienated by the blatant political bent of the employees, the establishment, and even the graphic design on the cups, some folks just don’t roll that way.

Some of us, like me, just want to run in, engage in a brief, polite exchange of goods for currency, and get on with our day. Not a terribly complex concept.

Still, it’s apparently a bit of a novel idea in our deeply divided nation that political debate doesn’t need to invade every single aspect of life. Don’t get me wrong, politics is incredibly important (especially when your job is to write about it), but—pardon the phrase—sometimes you need a safe space from the chaos.

Dunkin’ Donuts gets it, and they refuse to touch social or political issues with a 39-and-a-half foot pole.

Drayton Martin, along with her fellow Dunkin’ Brands execs, probably has political opinions of one variety or another. But, as Dunkin’s VP of brand stewardship, those opinions simply do not come into play in business operations. I have no idea who Martin (or anyone else at Dunkin’) plans to vote for, what social causes are important to her, or where she stands on cow farts. And I like it that way.

“We are not Starbucks, we aren’t political,” Martin said during a lunch panel at the 2019 meeting of INTA, the International Trademark Association, according to several tweets from attendees of the un-recorded event.

“We don’t want to engage you in political conversation, we want to get you in and out of our store in seconds,” she said, taking a shot at Starbucks’ past attempts to use their cup designs and baristas to start cultural conversations on issues like race.

"we are not starbucks, we aren't political– we aren't gonna put stuff on our cups to start conversations. we don't want to engage you in political conversation, we want to get you in & out of our store in seconds. it's donuts & ice cream– just be happy."#dunkin #inta2019

Wait, you mean I don’t have to get a sociopolitical lecture along with my caffeine and sugar dose? There’s another way?!

According to another law professor in attendance, Martin added that they “don’t want people burning their Munchkin boxes” in protest of some bold stance the company took on any non-donut-related issue.

This really shouldn’t be such a groundbreaking concept. For the many individuals who make up a company to each have their own unique perspectives on important issues is fine—heck, it should be encouraged. But a brand does not need to be identified with a political movement, especially if it’s going to alienate a huge chunk of would-be customers.

Dunkin isn't Starbucks, they don't want to start a conversation on their cups. They want you in and out in a minute and twenty seconds. Have conversations with your friends; Dunkin isn't your friend. (This is such a New England attitude, I love it.) #INTA2019

And, let’s face it, if you don’t have friends to discuss politics and social issues with, there’s always Twitter.