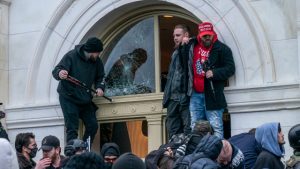 A new report says that watchdogs for the Justice Department and the Pentagon are going to be starting investigations into the siege of the Capitol building last week to take a look at the actions that various departments took and might should have taken leading up to and during the mayhem that transpired last week.

The Justice Department’s watchdog office announced Friday that DOJ Inspector General Michael Horowitz’s office “is initiating a review to examine the role and activity of DOJ and its components in preparing for and responding to the events at the U.S. Capitol on January 6, 2021” in coordination with watchdogs from the Defense Department, the Department of Homeland Security, and the Department of the Interior.

The DOJ inspector general inquiry will review “the role of DOJ personnel in responding to the events at the U.S. Capitol on January 6” and will examine “relevant” information “available to DOJ and its components in advance” of the storming of the Capitol and “the extent to which such information was shared by DOJ and its components with the U.S. Capitol Police and other federal, state, and local agencies.”

Horowitz’s office will “assess whether there are any weaknesses in DOJ protocols, policies, or procedures that adversely affected the ability of DOJ or its components to prepare effectively for and respond to the events at the U.S. Capitol” and may look into other issues that arise during the investigation too. The watchdog office promised to “take care to ensure that the review does not interfere” with current criminal investigations and prosecutions.

One DOJ official told courts on Thursday that the rioting that transpired at the Capitol last week was a “violent insurrection that attempted to overthrow the United States Government,” and went on to note that there was “strong evidence…that supports the intent of the Capitol rioters to capture and assassinate elected officials.”

The question we want to know is how in the world these folks could have been so unprepared for potential violence? Whenever an event of this magnitude is being planned and it’s well known the protest is going to happen, you always should be ready for the worst, while hoping for the best.

That did not happen here. An investigation will hopefully provide the answers we all need.