WATCH: You’ve Got to Hear What Trump Says He’d Do If He Debated “Pocahontas” 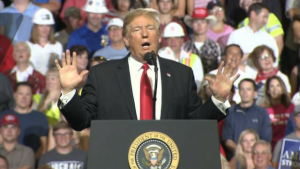 The Pocahontas jokes will never get old.

Thursday night, speaking to a rally in Montana for Republican Senate candidate Matt Rosendale, Trump told the crowd what he thought it would look like if he were to run against Elizabeth Warren, one of the Democrats’ top choices for President, and it was pure comedy gold.

In case you’ve been living under a rock, Elizabeth Warren has been slammed by both the right and the left for claiming Cherokee ancestry while refusing to take a DNA test. She’s been relying on her old family stories of Cherokee heritage to boost her status on the intersectional hierarchy for decades, but it keeps getting her in trouble.

As pathetic as it is that she’s one of the frontrunners for the 2020 Democratic Presidential bid, it would be well worth it to see her debate Trump after he revealed what he has planned:

“But let’s say I’m debating Pocahontas, I’ll do this,” Trump said. “I promise you I’ll do this, you know those little kits they sell on television for $2? ‘Learn your heritage.’ I’m going to get one of those little kits and in the middle of the debate, when she proclaims she’s of Indian heritage — because her mother said she has high cheekbones, that’s her only evidence.

“We will take that little kit — we have to do it gently because we’re in the Me Too generation, so we have to be very gentle,” Trump continued in a mocking tone. “We will very gently take that kit and we will slowly toss it, hoping it doesn’t hit her and injure her arm, even though it only weighs probably 2 oz.”

“And we will say, ‘I will give you a million dollars, paid for by Trump, to your favorite charity if you take the test and it shows you’re an Indian,'” Trump told the crowd in Great Falls. “And we’ll see what she does. I have a feeling she will say no, but we will hold it for the debates.”

Trump threw in another quick shot at Warren before he was done. “Pocahontas, I apologize to you. To the fake Pocahontas, I won’t,” Trump said.

Please run for President in 2020, Pocahontas!!