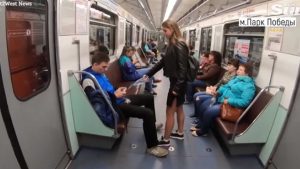 I cannot emphatically express enough what an absolutely abhorrent, unproductive, and utterly privileged thing it is to do to pour bleach on men’s crotches in the name of feminism.

Because these men aren’t rapists or wife batterers or even adulterers. In that case, I might understand. Heck, I think we could do with a bit more corporal punishment for men who seriously abuse women, children, or even other men.

But no. This Russian feminist is pouring bleach on men’s crotches to protest manspreading.

You know, the way many men sit because their anatomy happens to be ever-so-slightly different from a woman’s in the crotch area? Yeah, feminists think, with all their privilege and the blessings of a Judeo-Christian society with chivalrous virtues that regards women as equal in worth and rights to men, that that is oppressive to women.

No, I’m sorry ladies, pouring bleach on men’s crotches because you don’t like how they sit is the very definition of man-hating.

The Daily Wire reports on Russian law student and feminist Anna Dovgalyuk’s crusade against manspreading in the Russian subway.

In a “video manifesto,” Dovgalyuk dumps the mixture contained in a water bottle onto over 60 men’s crotches. Most are too stunned to react, but others attempt to confront her for her abhorrent actions.

“This solution is 30 times more concentrated than the mixture used by housewives when doing the laundry,” she claims in the video, per The Sun. “It eats colours in the fabric in a matter of minutes — leaving indelible stains.”

Manspreading is a “disgusting act that is being fought around the world — but hushed up here,” she adds.

“This is my new video manifesto, dedicated to the problem of manspreading,” writes Dovgalyuk via Instagram. “The disgusting act that is being fought with around the world and it is hushed up in us. Men demonstrating their alpha-manhood in the subway with women and children around, deserve contempt. If you publicly show what kind of macho you are, we will publicly cool you off!”

I’m not sure how they do things in Russia, but in the US, this is most certainly considered assault.

And, if I may be so bold, in Muslim cultures this is the sort of thing that happens to women who show an interest in Western music or go out in public without a male escort.

There are actual crimes against women happening the world over, and I’m sure that’s the case in Russia too. But if you think starting to combat this by accosting random strangers for simply sitting comfortably, you, my friend, are absolutely not part of the solution. You are very much part of the problem.

Gosh, I can’t even with this stuff, you guys.