WATCH: Woman Climbs the Statue of Liberty to Protest ICE (or Something) 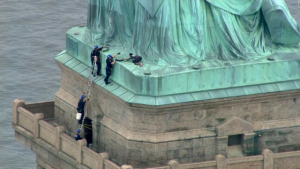 No, you didn’t have too many wine coolers by the pool yesterday–that was a woman scaling the Statue of Liberty you saw on your newsfeed.

The woman, a Congolese immigrant with her own bone to pick with ICE, apparently, managed to get Liberty Island evacuated and no doubt ruin the holiday for the countless rescue workers who had to escort her down after a four-hour standoff.

And no, she did not, in fact, manage to get ICE abolished in the process.

The woman, Therese Okoumou, began her climb shortly after the protest group “Rise and Resist” unfurled a banner that said ABOLISH ICE at the base of the Statue of Liberty.

Rise and Resist is at the Statue of Liberty demanding Trump and the GOP #AbolishICE, reunite families now, halt deportations, and end detention as a deterrent. #EndFamilySeparation #AbolishCBP #FreeOurFuture #HereToStay pic.twitter.com/panS03KTFe

The climber was among about 40 demonstrators who earlier unfurled a banner calling for abolishing the federal government’s chief immigration enforcement agency, said Jay W. Walker, an organizer with Rise and Resist, which arranged the demonstration.

Walker said the other demonstrators had no idea the woman would make the ascent, which wasn’t part of the planned protest.

“We don’t know whether she had this planned before she ever got to Liberty Island or whether it was a spur-of-the-moment decision,” Walker said.

Okoumou was promptly arrested after being rescued.

JUST IN: Woman who scaled base of Statue of Liberty detained by authorities, led back down after several-hour standoff. https://t.co/VQbxWDci6R pic.twitter.com/Y18NBIxJ96