WATCH: When You’re Trying to Be a Martyr But You Need to Scratch Your Nose 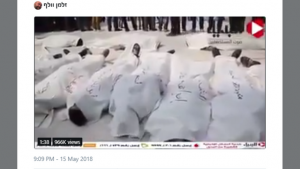 If you haven’t yet caught wind of the outrage about what’s going on with Hamas on the barrier wall on the Gaza strip, congratulations, you don’t want mainstream news.

The media, at home and globally, have been clutching their pearls over the violent clashes that have been going on for months, hitting a crescendo this week during the 70th anniversary of Israel celebrations and the opening of the US Embassy in Jerusalem.

While all you’ll hear from our friends in the media is that Israel is cruelly mowing down brave peaceful protesters who just want peace, sunshine, puppies, and rainbows, but what you’ll hear from Israel…as well as Hamas itself, is a little different.

You see, Hamas has been pulling this same stunt for years, infamously using children as human shields to get the death counts up for the coverage they’ll get from a favorable, anti-Israel media who live in complete denial of what Hamas is actually up to.

“There are so many media outlets that are acting as propaganda arms for Hamas,” Ben Shapiro told Fox & Friends this week. “Hamas has not been unclear about their intents here. They have been saying for weeks they want to send literally 100,000 people to storm the border with Israel. Hamas has been obvious, they say ‘we want to break in, we want to kill Israelis.’”

Well, this absolutely ludicrous clip is making the rounds on social media (definitely not the mainstream media) that is entirely demonstrative of the fact that Hamas literally plans as much blood an carnage as possible for the sake of getting on the news:

When you're a dead Palestinian martyr but your nose keeps itching pic.twitter.com/WUh60xq7t5

As you can see, one of these martyrs is moving around under the sheet. As if we needed more proof Hamas wasn’t doing this for the sole purpose of making Israel look bad and have clueless, virtue signaling governments and media establishments from Western nations defend their attempted terrorism.

Just yet another friendly reminder as to why no one trusts the MSM anymore.