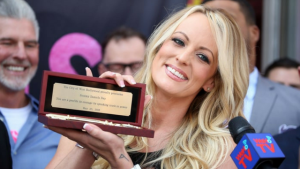 “Only in West Hollywood,” an attendant of West Hollywood’s first annual “Stormy Daniels Day” celebrations told YouTuber Fleccas Talks this week, who was there to interview the enthusiastic crowd on their support for the adult entertainment star.

Daniels was given the keys to the city on Wednesday as the city officially recognized May 23th as a holiday from here on out to honor the woman accusing the President of paying her off for staying quiet about their alleged 2010 affair.

West Hollywoodians (?) told Fleccas that they thought she was fully deserving of the prestige for the brave work she was doing to “expose the president”, although exactly what she’s doing and exactly why they believe Trump needs exposing was…vague, at best.

The Daily Wire‘s Amanda Prestagiacomo was a little more blunt, calling the event attendants “clueless”. You can see why she said that:

“She and her lawyer are doing a really good job of exposing Trump,” said one man, who added that Trump “is murder for us.”

Stormy “is accepted, and people look up to her, and they appreciate her for what she’s done,” said one female.

“Listen, it’s 2018, ‘King Trump’ is the president and what better way to bring him down than this?” said another anti-Trumper. “He’s just a crook, man. This makes perfect sense.”

“I think he’s a pig,” said one woman of Trump, who in her next breath said that MS-13 members “are not animals at all, they are human being like all of us.”

“I think he’s criticizing his own American people,” said another.

Others said that not all members of the gang are animals. “It’s a big gang,” rationalized one man.

Another man compared Trump to the gang members. “You smell your own, I guess,” he said.

MS-13 is, of course, the notoriously violent gang whose charming motto is “rape, steal, control,” and is involved in drug, human, and weapons trafficking has been known to decapitate their victims or rip their beating hearts out of their bodies.

But I guess that’s what you get out of a town that just gave Stormy Daniels the keys to the city and her own friggin’ holiday.