WATCH: Viral Video of Chick-Fil-A Employee Reminds Us Why They Win the Culture War Every Time 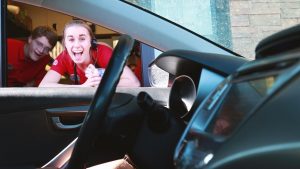 Chick-Fil-A is an awesome company. Their food is delicious, their service unsurpassed, their facilities are always clean, plus they love Jesus and trigger leftists to no end.

What could be better?

They’re so awesome, in fact, that when leftist Twitter founder and CEO Jack Dorsey recently tweeted that he’d eaten there and was subsequently bashed by his liberal followers for doing so, the Huffington Post then ran an article where a man complained that no one was sticking to the boycott plan formed a few years ago after Chick-Fil-A CEO voiced his pro-traditional marriage views.

Even the angriest of leftist can’t resist the delicious chicken and excellent customer service.

A recent viral video of a Chick-Fil-A employee going above and beyond for a customer is reminding everyone exactly why their business model has been so successful.

Talk about dedication. This video, taken outside @ChickfilA Westchester Commons, appears to show a worker chasing down a customer who forgot her order. Nice hustle! 🏃🥇#RVA pic.twitter.com/iXF0bgP26x

The video, which has now gone viral, shows a Chick-fil-A employee literally chasing down the car of a customer who had forgotten their order. The employee is clearly winded afterwards, showing just how hard he really was trying to make sure the customer left fully satisfied.

The Daily Wire explains that this is a simply a reflection of core Chick-fil-A values…values that work:

The actions of the employee reflected Chick-fil-A’s stated corporate purpose: “To glorify God by being a faithful steward of all that is entrusted to us and to have a positive influence on all who come into contact with Chick-fil-A.”

The kinds of values espoused by this Chick-Fil-A employee have obviously paid dividends; in April, the restaurant consultancy Technomic predicted that in the next few years Chick-fil-A will likely leapfrog over Taco Bell, Burger King, and Wendy’s to become America’s third-largest fast food restaurant, only trailing McDonald’s and Starbucks.

This is exactly why, no matter how much outrage is directed at the fast food chain, they continue to open new stores and rake it in. They work hard, apply biblical values, and care about their customers.

They’ve managed to survive as an open pro-traditional marriage company for years now, in a period of history in which many other businesses may have been destroyed by expressing such views.

Of course, nothing beats that delicious chicken.