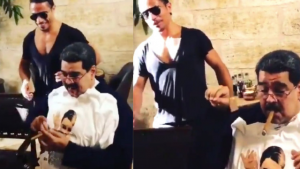 Nicolas Maduro is every bit the classic socialist leader.

Does he relate to the people, empower workers, stand up for the little guy, and ensure the needs of his citizens are fully met?

He dines on steak dinner with eccentric celebrity chefs while his people stand in endless bread lines and dig through garbage just to survive.

Remember the “Salt Bae” meme of the flamboyant chef who made sprinkling salt on steak look like flamenco dancing?

Well, he was thrilled to host Maduro at his Istanbul restaurant recently as Maduro returned from a visit to China where he was begging for money to keep his crippling nation from falling deeper into chaos, and he captured the whole ridiculous affair on social media so the world could collectively groan at what a disgusting, corrupt hypocrite Maduro is.

A now-viral video posted Monday shows Maduro chowing down on hunks of red meat — flamboyantly sliced and sprinkled with salt by the Instagram-famous chef — at the upscale Nusr-Et steakhouse in Istanbul, Turkey, where cuts of steak go for hundreds of dollars a pop.

Another clip shows him casually puffing on a cigar at the restaurant, alongside first lady Cilia Flore.

But critics in Venezuela — where food shortages have caused tens of thousands of people to go hungry — are smoking mad over their leader’s flashy feast.

“While Venezuelans suffer and die of hunger, Nicolás Maduro and Cilia are enjoying themselves at one of the most expensive restaurants in the world,” fumed Julio Borges, the exiled former president of the country’s national assembly, according to the UK Guardian.

If only Salt Bae could dole out shame like he does salt.