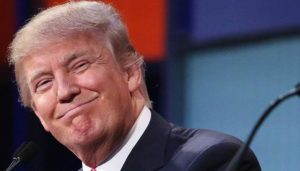 President Obama’s speech last week as he received an award in ethics in government (*cough*) has provided critics with endless material as the outrageous statements he made continue to seek in.

For instance, he brought up so-called “wild conspiracy theories about Benghazi” just days before the sixth anniversary of the Benghazi attacks in which four Americans were killed while being denied assistance from his administration.

While receiving an award in ethics in government.

Sorry, I seriously can’t get over that.

He also attempted to take credit for and simultaenously criticize Trump’s economy, which caught the attention of POTUS himself, who responded in a very fitting fashion:

By trolling the heck out of him on social media.

Under the caption “JOBS, JOBS, JOBS”, the White House used Obama’s own words against him, juxtaposing Obama’s claim that there are jobs that simply “won’t come back” with Trump’s boasting of bringing back over 400,000 manufacturing jobs.

“Wages are growing at the fastest pace in nearly a decade,” Trump says in the video, citing a report at a rally. “More Americans are employed than ever before in the recorded history of our country.”

Trump loves to brag but in this case, he’s totally entitled, as The Daily Wire reports:

The Trump economy is indeed booming. As The Daily Wire reported on Thursday, U.S. Labor Department numbers indicated a near 50-year low in workers’ unemployment benefit filings. The administration has also ushered in a strong 4.2% GDP (gross domestic product) for the April-June quarter, the fastest rate since 2014’s third quarter, according to Reuters.

Minority groups have seen significant gains in the record-breaking economic boosts, too. “The national unemployment rate has dropped to just 3.9%, per the Bureau of Labor Statistics. In July, unemployment for Hispanics hit a new record low at 4.5% and Black unemployment hit 5.9% in May, the lowest it’s been since 1972,” noted The Daily Wire.