WATCH: Trump Straight-Up Calls Reporters Out for Being Democrats 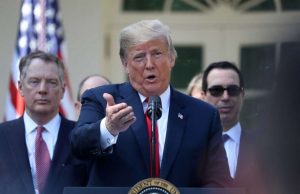 I learned something new today.

Although the left-leaning bias of the media is painfully obvious to many, although the Republicans have been getting unbalanced and unfair treatment by the media for decades and Clinton and Obama could have killed puppies for fun and the press would have praised them for it, although 96% of reporters polled in 2016 donated to Hillary Clinton…no President in history has ever outright called reporters Democrats.

Until Trump, of course.

While most people on the right likely assume that most reporters are registered Democrats and it doesn’t even seem that controversial to say so, Trump just became the first POTUS to call them Democrats to their faces.

I don’t think anyone could argue that if any president were to do so, it was definitely going to be Trump.

Trump was addressing reporters gathered at the White House for a press conference on the new trade agreement reached between the U.S., Mexico and Canada when he veered off script and took questions on his embattled Supreme Court nominee Brett Kavanaugh.

Trump took aim at Senate Democrats for targeting Kavanaugh, saying, “I know them too well. You know what? They are not angels.” (RELATED: Trump Tells Reporter To Ask Question About Trade At Trade Event)

Trump expounded on the “angels” allegation later, decrying Senators Richard Blumenthal, Cory Booker and Dianne Feinstein for various lies and sexually explicit activity. Trump then turned his aim to the press, saying that Feinstein leaked the allegations to them.

“More importantly, in a sense, for her to have waited for that period of time enough for you Democrats,” Trump continued, “And I guess I’m including you, too, the media. I consider you a part of the Democrat Party. But, for you, for the Democrats, to be talking about, ‘We want more time for the FBI.’ If you wanted more time for the FBI, why didn’t Dianne Feinstein bring this up?”

While it is certainly fair for journalists to have their preferred political party and vote in elections same as any other American, it is also not incorrect to refer to them as an arm of the Democrat party.

No one forces them to take the exact same narrative that Democratic politicians make, and tow the line when they are trying to use things like the accusations made against Brett Kavanaugh to their advantage.

They do it all on their own…while pretending to be objective.

The press loves to complain about how the President treats them and how the public doesn’t trust them, but they’ve undermined public trust themselves. Trump just says what we’re all thinking.

Trump: I consider the media part of the Democratic party. pic.twitter.com/nq5P7peqKe