WATCH: Trump Preparing to Board Marine One After Round Table Discussion on MS-13. Then This Happens 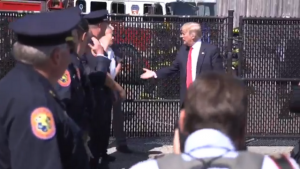 Donald Trump has made all kinds of mistakes as President. He is far from a polished, suave, diplomatic politician.

In many ways, that’s why we elected him. He’s human. He’s flawed, he shows it, but what we see is what we get. He doesn’t always make the best policy decisions, but he’s also made some great ones, and overall, he has stayed true to some very significant campaign promises, which is a remarkable thing for any politician, much less the President of the United States.

On Wednesday, in the wake of his controversial (and entirely true) statement about the notoriously violent and sadistic MS-13 gang members being “animals”, the President attended a round table discussion in Bethpage, New York on the infamous gang and met with family members of those who had been murdered by MS-13 members.

His “animals” comments came during a meeting last week with police chiefs from around the nation, when he responded to Sheriff Margaret Mims, of Fresno County, CA, explaining to the President what the Sanctuary State restrictions did to her ability to prosecute MS-13 members who were illegal aliens.

The media took the comment right out of context and caused a big frenzy, as they are want to do, but in reality, this overshadowed one of the biggest reasons we need stronger borders and to end sanctuary city policies: so our LEO’s here at home can properly do their job to deter crime.

Trump has always shown an incredibly amount of respect for our men and women in uniform, and this is reflected both in his policies–and in his public behavior.

This touching video was captured just moments before the President was due to board Marine One after the MS-13 discussion, when he noticed some police officers standing off to the side, waiting to meet him.

.@POTUS @realDonaldTrump loves our law enforcement officers all around the country – as seen here with @NYSPolice and @NassauCountyPD on his way to Marine One in Bethpage, New York. #LESM🚔🇺🇸 pic.twitter.com/HP0JpiXFYz

The same POTUS who once famously helped a Marine retrieve his hat after it was blown off as he waited for Trump to board Marine One breaks away from his entourage and jogs over to the line of police officers hoping to catch a moment with the President.

You can see in the enthusiasm with which the men shake hands that the respect is conveyed on both sides, as Trump salutes and shakes hands with the officers. It is a very sobering reminder that at the end of the day, the men and women who keep our communities safe are looking to Trump to enact policies to help them do their jobs more effectively.

You’ve got to hand it to him–Trump knows how people feel and the simple things they are looking for in a leader. And a brief, touching moment like this is a good reminder that that leader, however flawed at times, has come in the form of Donald Trump.