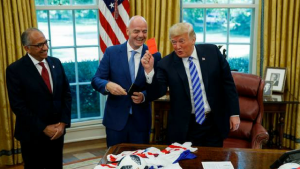 Whether you love him or hate him you have to agree (OK, a lot of people who hate him won’t agree but it’s still objectively true) that Trump is actually really funny.

Especially when he’s trolling the media, which he does beautifully.

Only Trump called fake news the enemy of the people, and for some reason, they’re all still hilariously owning this label which kind of sort of is an admission that they’re fake news.

And again, whether you love Trump or hate Trump you have to agree the press certainly has it out for him.

So they are just all too easy for him to toy with.

His latest hilarious moment came when the FIFA president visited the White House (for some reason) and gave POTUS some soccer cards as a gift and he promptly offered the press a red card.

Because of course he did.

WATCH: President Trump jokingly gives the press a red card after receiving soccer penalty cards as a gift during a FIFA meeting in the Oval Office. pic.twitter.com/ildNB6qCp7

“In soccer, we have referees. And they have cards,” Infantino explained.

“Yellow cards and red cards. Yellow card is a warning, and when you want to kick out someone, this one right here.”

Trump couldn’t grab the red card fast enough … nearly chucking it at the media assembled in the Oval Office!!