WATCH: Trump Explains What He’s Going to Do Next Time Acosta is Disruptive 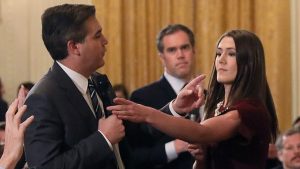 We’ve come to know and love Jim Acosta’s ridiculous, narcissistic antics at White House press conferences, so it was all in all good news he was being allowed back in to make a fool of himself all over again.

Acosta’s hard pass had been temporarily revoked after he refused to hand the microphone back to a White House intern per the President’s instructions.

Now, while the First Amendment doesn’t guarantee anyone’s right to hog the mic at a press conference, anywhere, there is certainly no reason that the press shouldn’t be allowed to antagonize the President. They should, and they have a duty to.

Making everything they ever report on all about how sad it is to be Jim Acosta, now, that’s a different story. Sure, the First Amendment protects Jim Acosta’s right to obsess about Jim Acosta, but it doesn’t make him a hard-hitting or professional journalist.

And, the President revealed during an interview with Fox News set to air Sunday, the next time Acosta plans to throw a fit and hog the mic at a press conference, POTUS will be shutting that mother down.

A federal judge who you appointed has just ruled that you must give CNN reporter Jim Acosta his press pass back,” Fox News Chris Wallace said. “Your reaction to the ruling, sir.”

“Yeah, it’s fine I mean it’s not a big deal,” Trump responded. “What they said though is that we have to create rules and regulations for conduct etc. etc.”

“We’re doing that, were going to write them up right now,” Trump continued. “It’s not a big deal and if he misbehaves we’ll throw him out or we’ll stop the news conference.”

“What are your rules going to be?” Wallace responded. “What is it that you’re saying?”

“We’re writing them now. We’ll have rules of decorum you know you can’t keep asking questions,” Trump replied. “We had a lot of reporters in that room, many many reporters in that room and they were unable to ask questions because this guy gets up and starts you know doing what he’s supposed to be doing for him and for CNN and you know just shouting out questions and making statements too.”

“But I will say this look, nobody believes in the First Amendment more than I do and if I think somebody is acting out of sorts I will leave I will say thank you very much, everybody, I appreciate you coming and I’ll leave,” Trump concluded. “And those reporters will not be too friendly to whoever it is that’s acting up.”

President Trump on what will happen next time CNN's Acosta misbehaves: "We’ll throw him out or we’ll stop the news conference … if I think somebody is acting out of sorts I will leave I will say thank you very much, everybody, I appreciate you coming and I’ll leave." pic.twitter.com/dDCIgeXnOJ