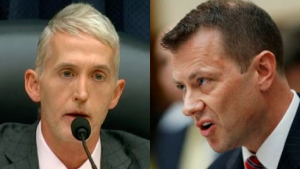 You can always count on Trey Gowdy to bust through anyone’s bad defense.

In the much-anticipated House Judiciary Committee testimony of Peter Strzok, the FBI agent whose texts exchanged with FBI lawyer, Lisa Page, with whom he was having an extra-marital affair, revealed a deep and disturbing bias from a person who was supposed to be investigating both Hillary Clinton and the Trump campaign.

That’s right–Strzok texted to Page that he was determined to “stop” the Trump presidency and that Hillary would win the election while he was intimately involved with the investigation into her deleted emails.

He also told Page of an “insurance policy” he planned in case Trump was elected, and months later he was the agent who initiated the Trump-Russia investigation.

His bias was so problematic, in fact, that Robert Mueller actually dismissed him from the Russia investigation once the texts were discovered.

Strzok, after sitting through 11 hours of private questioning by the Judiciary Committee of which Gowdy is chair, publicly testified on Thursday and experienced first-hand the wrath of Gowdy, who became a favorite on the right after his brutal grilling of Hillary Clinton during the Benghazi hearings.

Now, it should be noted that Gowdy and other Republicans who held Strzok’s feet to the fire were definitely met with their share of resistance from House Democrats, who routinely interrupted, rushed to Strzok’s defense, and, at one point, even tried to bring the whole thing to an end.

It was almost as if they didn’t want Strzok to be held accountable for likely trying to tamper with a general election, isn’t it?

But as House Judiciary Committee Chairman Bob Goodlatte, R-Va noted in his opening statement, there is absolutely no way they’d respond the same way if the tables had been turned.

“To my colleagues on the other side of the aisle, please replace President Trump’s name with your own name in a small sample of things Mr. Strzok has said,” Goodlatte said, referencing Strzok’s glaringly biased texts with his lover. “Envision how you would feel if you found out that the chief agent investigating you as a Member of Congress was making these comments: ‘F Trump,’ ‘Trump is a disaster,’ ‘Just went to a southern Virginia Walmart.  I could SMELL the Trump support’ – or, perhaps most alarmingly and revealingly, ‘We’ll stop it’ – referring directly to Mr. Trump’s candidacy for President.”

But whoever is being slapped around by Trey Gowdy, it’s always gratifying. So grab some popcorn and enjoy the show:

(Actual questioning begins at 12:40 after lots of disruptions from the Democrats)