WATCH: This Parody Video of a Support Group for “Woke” Twenty-Somethings Is HILARIOUS 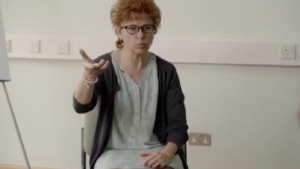 They say if you’re not a liberal when you’re young, you don’t have a heart.

Well, today’s twenty-something Millenials are blowing that expression right out of the water, falling over themselves to be as politically correct, intersectional-adherent, and, well “woke” as humanly possible, they’re most likely ruining their lives.

British comedian Tracy Ullman brings us this hilarious video, which pokes way too  much fun at those who are “too woke” to have any fun.

It opens in typical support group style, with a new member introducing himself to the group.

“Oscar” explains how it all started for him, probably much like the rest of them.

“Signing an online petition, going to a march,” he says, as the group nods understandably.

“Before I knew it I was writing to The Guardian about LGBT representation in the Harry Potter books.”

“Which is shocking, by the way,” interjects one young woman.

She goes on to explain that Oscar has come to the right place.

“All of the young people in this room are ruining their lives by being overly virtuous,” she explains, only to be corrected by another young man who explains to her that the term “young people” is a microaggression to the elderly, to which Libby attempt to one-up his virtue signaling by arguing he’s not “giving agency to the elderly, which is worse.”

Ullman shushes them and continues to explain the dangers of a downward spiral of “wokeness.”

“No of course not,” she says, “it’s just an example,” before reassuring the young people that they can’t spend their twenties trying to be overly virtuous, because “by the time you hit your thirties, you’ll be massively right-wing anyway.”