WATCH: This Little Girl’s AOC Impersonation Will Restore Your Hope In The Next Generation 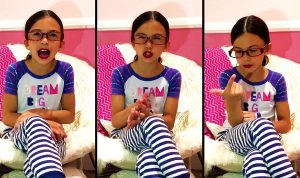 While the state of this country might have some folks rending their garments in despair, and rightfully so, there are plenty of glimmers of hope for the future if we just take a look around to find them.

Even as today’s public schools become far less shy about being leftist indoctrination camps, there are many children resisting the systematic attempts to fashion them into good little blue-voters and consumers.

Although she would like to present herself as an admirable role model to children and their climate-restoring savior, Alexandria Ocasio-Cortez became the subject of a hilariously sharp 8-year-old’s satirical impersonation.

Don’t get me wrong, it’s tempting to want to let up on AOC. There’s no need to gang up on someone and bully them simply because their beliefs are so sharply divergent from yours. But, as I’ve said before, she just can’t. Stop. Saying. Wildly. Ignorant. Stuff. It warrants news coverage, and, I dare say, it warrants satirization.

Thankfully, little Ava Martinez is happy to do the latter:

This sweet, adorable, 8yo actress is not only much cuter than the real #AlexandriaOcasioCortez but she’s also already much smarter too. I asked her to do this video because when #AOC is talking this is what we’re all thinking. We’re better off with this sweetheart in Congress. pic.twitter.com/QybovhN8WZ

Oh. My. Word. Somebody get this girl into Congress.

One can only hope that the real AOC has the chance to watch this little girl’s epic impersonation. Maybe she’ll step off her high horse and begin actually working to be considered a role model to children with common-sense policies rather than assuming she’s a hero to children by wanting to “save” them with her current childlike propositions.