WATCH: This Guy Just Wore a Wall Suit to A Trump Rally and It Was AMAZING 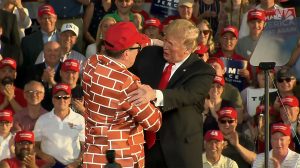 President Donald Trump welcomes a man wearing a wall suiot onto the stage in Montoursville, Pennsylvania on May 20, 2019.

If there is anything Trump is really good at, it’s connecting with his voters.

Say what you will about Trump, he loves his supporters and is never more in his element when he’s surrounded by a big crowd of red hats and cheers.

And can you blame him?

The more the media and Hollywood seem to hate Trump, the more his supporters seem to love him.

Trump supporters are great, and loyal as all get-out. These are proud Americans who go against the grain of the vast majority of what we’re told is popular culture these days and aren’t afraid to show their support for the most controversial president of all time.

They also have an awesome sense of humor, like the man who wore a wall suit with a sign that said “build me” to the President’s recent rally in Montoursville, Pennsylvania on Monday.

The suit was such a hit, the President ended up inviting him on stage.

Seeing him in the crowd amid chants of “build the wall!” Trump pointed at him, then asked, “Can we get him up here? Get him up here! Look at this guy!”

“We know who he’s voting here,” the president joked with the crowd.

Blake Marnell of San Diego, California, told Fox and Friends Wednesday that meeting the president on stage like that was an “out-of-body experience.”

“It was just like greeting an old friend you’ve known for a long time. I couldn’t see that happening in any other country in the world,” he said, adding that his experience shows how Trump “connects with people.”

“He’s so genuine. He’s not like any other politician and that’s a huge part of why he’s in office,” he added.