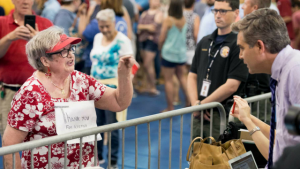 This news cycle has been completely exhausting, and if you’re anything like me, you’re probably ready to switch off your phone or close your laptop and just forget everything until all the hysteria dies down.

Acosta’s aim in reporting on the Trump administration is pretty clear: get on camera as much as possible. He loves to make himself part of the story, rather than simply reporting on a story, the way, you know, a reporter is supposed to do.

He’s had his share of chiding, even from cool, calm, and collected Sarah Sanders who told him earlier this month she knew he couldn’t understand “even short sentences” (lmbo love that woman), but a woman who attended Trump’s rally in South Carolina Monday night really takes the cake.

“CNN’s Jim Acosta received a less than pleasant welcoming at President Donald Trump’s rally in South Carolina on Monday as he was mocked by an elderly woman and yelled at by many who told him to go home,” the Daily Wire‘s Ryan Saavedra reports.

“In multiple videos and photos posted to Twitter, the woman could be seen leading jeers against Acosta,” he explains.

Here’s some video of a woman berating @Acosta. This went on for several minutes as many in the crowd cheered her on. As someone who’s covered my share of Trump rallies, it feels like 2016 all over again. pic.twitter.com/j0SF2nFDvG

At the risk of letting an opportunity to play the victim and get attention go to waste, Acosta tried to claim that the woman used profanity when telling him to leave, but she hardly looks like she’d use that language.

“I had an elderly woman just a short while’s come up to me—she came up to me and said that we at CNN should get the f*** out of this auditorium,” he said. “She turned to the crowd and whipped them up into a frenzy.”

“The Daily Wire has searched through all available video clips of the encounter,” Saavedra adds, “and was not able to find any proof that the woman said, ‘get the f*** out.'”

The CNN cameras, however, were able to capture the moment a Trump supporter snuck a “CNN SUCKS” sign right into the frame as Acosta was reporting, though, topping off this already beautiful evening: