WATCH: This Brave Little Girl Was Told Not To Use Trump For Her “Hero” Project At School 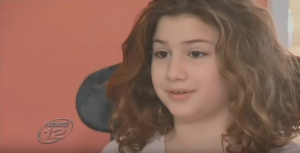 As Trump Derangement Syndrome (TDS) provokes the Left to ramp up their anti-conservative culture wars, their agents in the school system haven’t shied away from targeting any young kids who dare to fall out of line with the centered-left status quo.

Now, I’m old enough to remember the days when, even in the New York public school that educated me, we respected our classmates and teachers without regard for their religious, political, or other cherished convictions. Heck, back in my day you could even vote for whomever you dang well pleased in the school’s mock election and not run the risk of your mom kicking you out of the house over it. I wrote in James Earl Jones, by the way. He was great in Sandlot.

Honestly, whatever may come of grown adults hashing out their deeply divided political stances amongst themselves (preferably with respect and rationality), children should be safe. Children shouldn’t be targets in the culture war, especially by the school staff we trust to educate and care for them. Why is this even a question?

I don’t know the answer to that, but I do know that the TDS gaining ground in schools nationwide needs to stop.

Its latest victim is Bella Moscato, just 11 years old. 11, y’all. This little girl goes to school on Long Island (I feel your pain, Bella) and was tasked with choosing a role model or personal hero on whom to write a report for a class project.

Being a rather dedicated supporter of Donald Trump since she was 8 years old, Bella didn’t have any doubts as to who she’d pick.

The assignment prompted students to answer several questions about what makes someone a hero and who they know who fits the bill. One question asked students to name a “positive contribution” their hero has made to society. Speaking of President Trump, Bella answered, “Donald Trump has helped millions of people by creating a great economy. He is fighting every day to protect the people from drugs crossing the border.”

However, President Trump also “spreads negativity and says bad stuff about women,” Bella’s teacher reportedly told her, so she was forced to pick another hero and redo her project. And, because we all know schoolkids are perfectly moral little citizens and would never dare to bully or harass another student for literally any nonconforming trait they may possess, the teacher freely made this declaration and singled out Bella for her political stance in front of the whole class. Smart move, Einstein.

“I thought it was wrong because teachers are not supposed to say political stuff to their students,” Bella told her local news outlet. Well, folks, she ain’t wrong, and I can’t congratulate her enough for standing up to someone, even an authority in her life, attempting to tell her what to think and believe, rather than how to figure those things out for herself.

The school, however, is claiming that Bella was never told she couldn’t write her report on the president:

It is not accurate that this student was told that they were not allowed to conduct research or report on any individual for a school assignment, including President Trump. To the best of our knowledge, by choice the student is still conducting their project of President Trump.

Like any good parents, Bella’s were absolutely livid with the school over their blatant mistreatment and bias, as well as the superintendent’s apparent readiness to call the little girl a liar. So, when the school held a public board meeting shortly after the incident, the Moscatos let ’em have it.

With district officials maintaining that Bella’s teacher never instructed her not to use President Trump for her project, there’s not a whole lot that can be done.

But, hey, it’s a priceless, real-life lesson this little girl got to learn: If you have strong convictions, be prepared to be bullied, intimidated, or even silenced over them. Be prepared for the people responsible to get off scot-free. And, above all, be prepared to speak your mind and speak the truth, even if it gets you into trouble.