WATCH: These Bright Folks Superglued Themselves To The Capitol Building To Protest The “Climate Emergency” 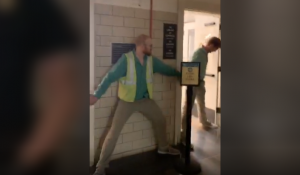 Folks, if we claim to love the Constitution, that means we need to accept that it applies to every U.S. citizen, including those with whom we disagree. This means, of course, that morons have just as legitimate a right under the First Amendment to peaceably assemble as anyone else.

And when they do, we have the right to freely speak and point out that they’ve just done something moronic.

In a nutshell, that’s just one reason why America is great.

A group of environmental activists tested this scenario in real life when they were superglued to a pair of doorways in the U.S. Capitol on Tuesday to protest Congress’ “failure” to officially acknowledge what they call the “climate emergency.”

No, they weren’t superglued to the doors by their pizza-faced teen brother and given an atomic wedgie—though I’d have quite a bit of empathy for them if that were the case. Instead, they fused themselves to the doorway. Something of an unbreakable human chain, if you will.

Extinction Rebellion, an organization known for employing civil disobedience to protest climate change, used Gorilla Glue to secure protesters’ hands onto the walls inside the tunnel that connects the House office buildings to the U.S. Capitol itself. The demonstration was meant to bring awareness to legislation declaring that the climate emergency demands a “national, social, industrial, and economic mobilization of the resources and labor” of the United States.

The resolution, sponsored by Sen. Bernie Sanders (I-VT) and Rep. Alexandria Ocasio-Cortez (D-NY), was introduced earlier in July, but has stalled in both the House and the Senate. Extinction Rebellion is demanding that the legislation advances to the chambers’ respective floors for a vote.

“What we wanted to do was disrupt business as usual in the lives of the congresspeople as they headed to the Capitol for votes at 6:30,” said Kaela Bamberger, a spokeswoman for Extinction Rebellion’s D.C. chapter, to The Washington Post, adding that “We were prepared with [an acetone solution to dissolve the glue] if the police had started forcing them off.”

Because no futile leftist protest is complete without attention-seeking via social media, Extinction Rebellion let the fine folks of Twitter in on 20 whole minutes of the incident:

“We’re blocking this doorway because Congress isn’t taking the climate crisis seriously,” one activist can be heard explaining in the video.

“If you respect the climate emergency, you will go around,” one activist had the nerve to say to a group of people trying to get through the doorway to their offices.

“I guess not,” another one said after the people simply passed through under their arms.

Rep. Lance Gooden (R-TX), who was on his way to vote when he came upon these leftist bridge trolls, shared his experience with The Daily Wire.

“It was silly, it was borderline comical,” Gooden said, adding that he simply went “between a gentleman’s hand and foot and said ‘excuse me’ both times” in order to get through.”

“In the future, I would have just let them remain self-glued to the walls when everyone goes home for the night,” the Texas congressman joked. “See who has the stamina to stick with it.”

I’m tempted to agree with Rep. Gooden, especially since being repeatedly “passed through” is far more embarrassing for the protester than the passer-through. Let’s just be thankful there wasn’t any sort of emergency evacuation at the Capitol that day. These folks would have been environmentalist pancakes.

Alexandria Ocasio-Cortez, as well as her fellow “Squad” member Rep. Rashida Tlaib (D-MI), were among the handful of Democrats in Congress who thanked the activists, The Washington Post reported. Of course.

The incident resulted in 17 people arrested — all of whom were charged with “crowding, obstructing, or incommoding,” confirmed Eva Malecki, a spokeswoman for the U.S. Capitol Police. Fifteen of those arrested were also charged with defacing public property, while eight were charged with resisting arrest.

Extinction Rebellion is based in the United Kingdom and refers to itself as an “international movement that uses non-violent civil disobedience in an attempt to halt mass extinction and minimize the risk of social collapse,” according to the organization’s website.