WATCH: The Moment a Gender Reveal Party Turned Into a Raging Forest Fire 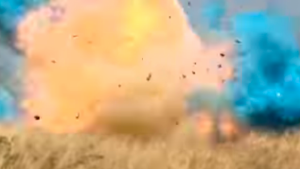 There are probably a lot of people out there who aren’t sure whether to be more triggered by the fact that this dude hurt the environment or that these people had the nerve to assume the gender of their unborn baby who, at that point, was just a clump of cells.

An off-duty Border Patrol agent has added to the bad publicity his employer is getting this week by raking up hundreds of thousands of dollars in fines after a gender reveal stunt involving an explosive Tannerite gender reveal kit went horribly, horribly wrong in 2017.

The fire was started by Dickey on state-owned land near Madera Canyon. It spread across the Santa Rita Mountains foothills to Forest Service and Bureau of Land Management land, including portions of the Empire Ranch. At its peak, the fire forced the closure of Arizona 83.

At the time Dickey shot the explosive target, winds were gusting up to 40 mph and the National Weather Service had issued a fire watch, Chuck Wunder, chief of the Green Valley Fire Department, told the Arizona Daily Star in May 2017. A fire watch is a red flag, warning that “conditions are ideal for wildland fire combustion and that there is potential for rapid spread,” Wunder said.

No injuries were reported from the fire and no buildings were destroyed, but some households in the Greaterville and Singing Valley areas were evacuated. At times, hundreds of homeowners were under pre-evacuation orders.

The fire caused $8.2 million dollars in damage and required 80 firefighters to control.

This week, Dickey agreed to pay $100,000 in restitution and another $120,000 in monthly installments of $500 for the next 20 years, the Daily Wire explains. He has also been sentenced to 5 years of probation.

A recently released video shows the very moment it all went wrong (for the record, he was having a boy).