WATCH: The Man Who Made 58 Crosses to Honor the Victims of Las Vegas Massacre Returns One Year Later 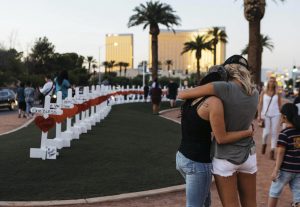 With all the hoopla over the Kavanaugh hearings, you may have missed a very important and poignant anniversary pass by quietly at the beginning of this week.

It has officially been one year since the horrific massacre that took place in Las Vegas on October 1st, 2017 in which 58 people were killed and hundreds injured while attending a country music festival on the strip.

Following the tragedy which shook our nation to the core, one Illinois man, Greg Zanis, a carpenter by trade, traveled to Vegas to construct wooden crosses to honor each of the fallen, which he placed below the iconic “Welcome to Las Vegas” sign.

Western Journal reports that while the original crosses have been moved to the Clark County Museum for display, Zanis made a return trip to Vegas to pay his respects on the anniversary of the shooting.

And he brought another set of crosses with him.

Zanis agrees that the sight is heart-wrenching to see. As he places the crosses at the memorial site, he said it’s all he can do not to cry.

Zanis wants the Las Vegas community to know that they are remembered, that each name on the cross is important.

“Just doing it for the families to show that we do care,” Zanis told KVVU-TV. “It’s been a year and just imagine what a family’s gone through.”

It’s nice to know that amid all the noise of our divided nation, there are people who are still taking the time to think of the suffering people deeply touched by incidents that get hyped up, politicized, and then dropped by the news media.

We commend Zanis for the care and compassion he is showing these families, and keep the families of the victims in our prayers this week as they relive that awful day and honor the memories of their lost loved ones.