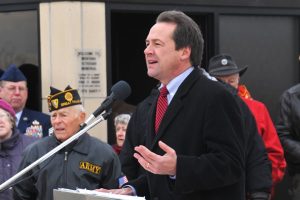 I know what you’re thinking, Steve Who? Another Democrat candidate? Seriously? Yes, folks, yet another Dem is taking a whack at the Big Show.

While Gov. Bullock doesn’t seem to have the radical-leftist pedigree of several of his competitors or the big-name appeal of a Sanders or a Biden, he does have one thing going for him.

Well, maybe not. When the governor of the traditionally red Big Sky Country was asked in an on-air Q&A what his most notable achievement in his career of public service has been, the poor guy’s brain just let one rip:

Despite being in office for nearly seven years, @GovernorBullock struggled to name a single accomplishment. Watch as he twists his way through his disastrous answer: pic.twitter.com/2jnC7hAASQ

After a painful seven seconds of stunned silence punctuated by an embarrassed “um,” Bullock’s brain finally re-established its connection to his mouth. That was only half the battle, though, as the words he proceeded to speak might not have been much of an improvement.

“I am happy that…,” Bullock sputtered, “hopefully my kids still know my most important job is being their dad.”

I mean, sure, that’s adorable, but sir, you’ve already landed the job of being dad to your kids. How in the flaming caverns of hell are you qualified to be the head of the executive branch of the federal government?

It gets worse. Bullock, with intermittent circuit failures causing more stunned silence, proceeded to excuse his apparent lack of accomplishment due to the fact that the work of a governor doesn’t always yield instant results the way other public offices might:

“I think that things were… You know, as governor, it’s not like attorney general when you know you won or lost a case. Sometimes you won’t have impact for years.”

Gotcha. Pardon me, Gov, but it doesn’t fill me with confidence that your administration, should you miraculously be elected, would have no discernible effect on the state of the country for years to come. Somehow that doesn’t sound like a good thing.

And, believe it or not, Bullock’s comments only got worse before his train of thought simply careened over a cliff:

“But, I know that 100,000 people have health care because of the work we have done. I know that we’ve done more… to try to keep the outside influence of dollars out of our elections so that your voice matters as long as you vote… more than some big treasury or company, I’m pleased with the way that we’ve invested in education, I think that’s one of the great equalizers we’ve had.”

Vague references to some sort of healthcare reform, resistance to corporate lobbying, and investment in education. Alrighty, then.

At this point, however, a vague, bumbling Dem might actually be the better face of the party than one who is concise and sharp in expressing more damnable leftist stances. Here’s hoping this dude gets the nomination!