WATCH: The Incredible Moment Everyone at the Nashville Airport Stopped for the National Anthem 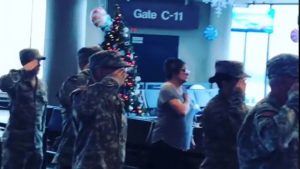 The National Anthem has endured quite a beating over the last few years.

While the left can usually be counted on to be anti-American, flag-burning has gone mainstream and anthem-kneeling is now cool, thanks to folks like Colin Kaepernick and the thugs over at Antifa.

To people who understand the very real, painful cost of freedom to burn flags and kneel for the anthem, however, there has never been a more important time to take a moment whenever we can to stand for the flag and appreciate this sacrifice.

Of course, few people understand the price of freedom better than the children of fallen soldiers.

And thankfully, there are still plenty of people in this nation who will take a moment out of a very busy day to show them some respect.

This is what happened at the Nashville International Airport recently when a plane full of children of fallen service members were being flown on an all-expenses-paid trip to Disney World and American Airlines threw a party for them at the gate.

When a flight attendant announced over the loudspeaker that they would be playing the National Anthem, the airport screeched to a halt. One stunned traveler who caught the incredible moment on video wrote about the experience on Facebook.

“I witnessed an international airport come to a complete stop today,” wrote Jen Tringale along with the video.

“At the Nashville airport I walked out into the concourse to this scene @americanairlines was flying a plane full of children who had lost a parent in combat to Disneyworld on an all expenses paid trip and they threw a party for them at the gate,” she explained.

“But when they announced them over the loud speaker and they lined up to board the plane the whole airport literally stopped and sang the national anthem with military present in salute. Most every person standing around, myself included was bawling at the sight of these kids and spouses who have paid so great a price for our country. To see all of this at Christmas time was so humbling. Seeing the general public in an airport stand still to honor these kids was simply beautiful.”

What a truly beautiful moment. We need so, so much more of this in America right now, folks.