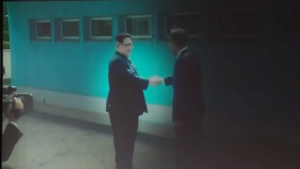 You’ve got to hand it to Trump, he is a natural showman.

This is certainly a huge part of why he got elected. He knows how to make waves. He knows how to drive the media insane. But most of all, he has a unique ability to read deep into the psyche of the American people and know what drives them.

He also, apparently, knows how to read deep into the psyche of 30-something dictators who are known for their love of Hollywood films.

So, when it came to working to convince Kim Jong Un to pledge to make peace in the Korean peninsula after all these years, he seems to have figured out an absolutely ingenious way to get through to Kim.

He made a fake movie preview about the choice Kim has to make.

This is not a joke.

A Los Angeles-based production company, perfectly titled Destiny Pictures, produced the 4-minute clip which The Blaze reports the two leaders watched on an iPad together during the summit.

How unreal is that? Trump told Reuters that he thought Kim “loved it,” and upon watching, you have to admit he’s probably correct. The thing is epic:

Cut between dramatic clips of the Korean peninsula, the beauty of Korean culture, and the promises of industry and prosperity that await a re-unified Korea are clips of Trump and Kim themselves, the two men who are faced with a very important choice: peace and prosperity, or war and devastation?

Can history be changed? Will the world embrace this change? And when could this moment in history begin?

It comes down to a choice — on this day, in this time, at this moment. The world will be watching, listening, anticipating, hoping.

Will this leader choose to advance his country and be part of a new world? Be the hero of his people?

Will he shake the hand of peace and enjoy prosperity like he has never seen? A great life or more isolation?

Which path will be chosen?

This is either the most ridiculous foreign policy approach in our nation’s history or one of the most brilliant. Possibly both, but perhaps a man as crazy and megalomaniacal as Kim can only be appealed to via his ego, something with Trump seems to very clearly understand.

In the same dramatic message, Trump makes clear to Kim that he can either be hailed as a hero for bringing peace once again to his people or suffer the wrath of the greatest military might in world history.

If Trump is successful in the region, there’s a very good chance this fake movie preview will have played a role. It’s just so crazy it might have worked!