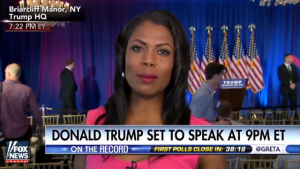 Omarosa has been running all over the mainstream media telling everyone what a big fat racist Trump is.

Why exactly? Because how else do you get publicity in 2018?

The reality-star-turned-Trump-aide-turned-gossipy-tell-all-book-author has been quite successful at garnering lots of attention for her forthcoming book… despite the fact that most of her claims about Trump’s racist comments seem to be based of very little other than her active imagination (and mainstream media savvy).

The most explosive claim she’s made is that Trump apparently used the n-word liberally during her time in office, which begs the question, why would she, a black woman, wait this long to tell anyone?

Anyway, it turns out that when she was still in Trump’s good favor, she was “certain” he was not a racist.

Mark Dice dug up this old clip of her reassuring a Fox News anchor of just that:

Either she was lying then or she’s lying now, either way it’s hard to take anything she says seriously.

Sadly, this won’t stop the mainstream media from fabricating all the appropriate headlines confirming what they’ve been trying to convince us all along: that Trump is a big fat, literally Hitler, racist.

And they wonder why we don’t trust them!