WATCH: That Time Obama Warned Parents Not to Send Their Kids to the Border 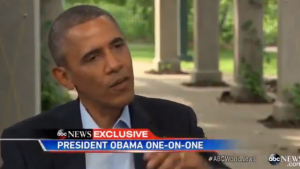 There is a very important aspect of this whole kids-at-the-border thing that it seems like no one is talking about.

The border is an incredibly dangerous place for children.

I’m not here to judge why a parent would walk halfway across Central America and through Mexico to reach the United States; there are certainly awful living conditions in many regions South of the border. Compassion for someone else’s desperate situations, however, doesn’t change the fact that if you cross the border of a sovereign nation with your child, you’re likely to face legal repercussions which may include being separated from your own child.

That is, of course, if you make it to the border together.

Many parents over the last decade have actually sent their children alone to the border, which the Democrats seem to have completely forgotten (they really have short attention spans, don’t they?)

This trend exploded so much during Obama’s time in office, in fact, that he actually went as far as to warn parents not to send their children across the border unaccompanied.

In an interview with ABC News’ George Stephanopoulos, Obama warned about the dangers of traveling through Central America to reach the U.S. border.

“Our message absolutely is don’t send your children unaccompanied, on trains or through a bunch of smugglers,” Obama said. “We don’t even know how many of these kids don’t make it, and may have been waylaid into sex trafficking or killed because they fell off a train.”

“Do not send your children to the borders,” Obama continued. “If they do make it, they’ll get sent back. More importantly, they may not make it.”

Obama’s comments, which did not upset the political Left at the time, fall in line with a number of horrifying immigration stories that took place under his leadership as president.

Obama to migrants from Latin America in 2014: "Do not send your children to the borders. If they do make it, they'll get sent back." pic.twitter.com/lDRT36KKdi