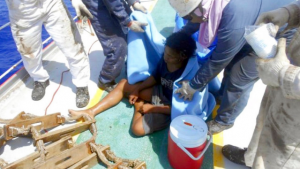 If you were stranded on a desert island, would a Bible be one of the items you’d prefer to have with you?

An Indonesian teenager who spent seven weeks adrift on a small fishing raft sure is glad he had his Bible, and although the rest of his supplies were meager, he attributes his survival entirely to the Big Guy and says reading his Bible daily kept his morale up.

His supplies consisted of of about a week’s worth of food and water, a two-way radio, and a Bible.

“Rice, clean water, spices, cooking gas, and other supplies ran out. To survive I caught fish and burned the rompong’s wooden fences to make a fire for cooking. I even ate raw fish,” he told the BBC.

“The teen said he offered many tearful prayers to God that he would be rescued so he could see his mother and father again,” Western Journal explains. “He also read his Bible and sang Christian songs.”

“He despaired at one point and considered committing suicide by jumping into the sea, but his faith helped him overcome the temptation,” they add.

While several boats passed him during his time at sea, he was finally able to flag down a Panamanian freighter and send his distress signal via radio. They rescued him, taking him with them to Japan where he was eventually flown home to Indonesia where he was finally reunited with his family.

He says he does not plan to return to fishing–but we’re willing to bet he will certainly not abandon his faith.