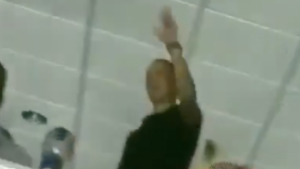 Spending the better part of eight years to destroy America must have been hard work!

So who can blame him for letting loose with the Mrs. at a Jay-Z concert? He’s living it up now that his leg of the journey towards the completion of the evil globalist agenda is complete.

And when we say “let loose”, we really mean let loose. Check out these moves:

OK, so the dancing is cringeworthy, but how many other woke 56-year-olds do you know that go to Jay-Z concerts, hm?

That’s what I thought.

Don’t you remember, he campaigned for Hillary? (Although I think it was a smart move for Hillary to avoid being caught trying to dance at a Jay-Z concert. Oh gosh…come to think of it, she still might try this…)

Trump isn’t cool enough for Jay-Z, at all, of course, he’s a total square. Don’t you remember what he said about Hillary when she campaigned with the pop star/producer?

“And his language was so filthy that it made me, like, the most clean-cut human being on Earth,” Trump continued. “He would stand up there before those crowds — and, by the way, without any musical instruments, I had much bigger crowds than he was drawing,” he continued.

“But, he’d stand up before those crowds and he would use the ‘F-word’ and Hillary would sit back— ‘hey, oh, I’m in trouble. I’m in trouble. Please don’t have him use that kind of language anymore’ — and then he would finis,h and everybody would leave. And she would be standing up, making a speech to 400 people.”