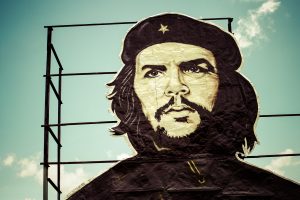 As someone who flirted with socialism in college, I can tell you right now that most kids never get a well-rounded education about radical socialist revolutionaries of the 20th century.

Not in school, not from the media, and sure as hell not on leftist-dominated college campuses.

I’ve often wondered if it was just an isolated incident that I, as a starry-eyed young adult, thought someone like Ché Guevara was cool and worthy of my uninformed, uncritical support. Back then, I had never heard anything of the vicious cruelty the man came to embody. Not a single one of my socialist, short-time friends seemed to know the first thing about what Guevara did in Cuba other than, you know, “fight for, like, freedom and, like, human rights and, like, stuff.”

But, surely all the other young, dumb college kids of the world must have formed a more educated opinion on the guy, right? Mine was just a rare, isolated experience?

In an effort to see just why college kids in particular are so enamored with Guevara, Prager University’s Will Witt made a visit to a new cafe on University of California’s San Diego campus: The Ché Café.

The responses Witt receives are incredible.

Witt first speaks with a male student working at the Ché Café and asks him to explain the place. “It’s part like a music venue, part like a student community center, part like a vegan kitchen and part a social space for radical ideologies and it’s also a safe space,” the young man answers.”

“So, when you say radical ideologies,” Witt asks, “do Trump supporters come here?”

“Oh, no. I mean more like leftist political ideas…If they start saying stuff that violates our stated policy, which includes like no racism, no transphobia, it’s like, then we will kick them out and stuff,” the bright young lad answers.

“No homophobia. No transphobia. No racism,” the student clarifies.

At that point, Witt offers a bit of crucial information these kids seem to be missing. For starters, Guevara rounded up Cuban homosexuals, the lucky ones of which were murdered while others were forced into work camps.

By the looks on their faces, it seems these students didn’t learn about that little detail.

If you are gifted enough to know anyone who ignorantly idolizes Guevara, do the right thing. Talk to them about it. I’m living proof that minds can change with new information.