WATCH: Socialist Ocasio-Cortez Slams Israel, Realizes She Has No Idea What She’s Talking About 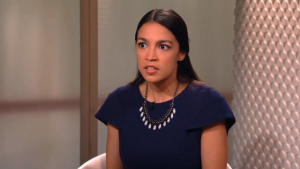 Most anti-Israel leftists have no idea what they’re talking about when it comes to Israel. All they know is that the media tells them Israel is mean and that the Palestinians are super duper oppressed.

Most anti-Israel leftists, however, aren’t put on the spot and forced to actually explain how the Palestinians are being super duper oppressed, but when you become an overnight darling of the left-wing media, you just might find yourself forced to answer for your regurgitated anti-Israel talking points.

This is exactly what happened to 28-year-old Alexandria Ocasio-Cortez, the Democratic Socialist congressional candidate and media favorite who seems to have about as much substance to her political platform as can fit on an Abolish ICE rally protest sign.

So when she was recently asked to elaborate on her views on Israel beyond the key sentence fragments the left relies on to demonize the IDF’s self-defense against Hamas terrorists, she found herself forced to admit she basically didn’t know anything about the Israeli-Palestinian conflict.

Ocasio-Cortez’s remarks came in response to a question from host Margaret Hoover, who asked her to explain comments she made about Israel after she attacked them for defending themselves against an attack from Hamas terrorists.

Ocasio-Cortez, who called the shooting a “massacre,” said that she thinks that Israel has the right to “exist,” adding, “but I also think that what people are starting to see, at least, in the occupation of Palestine, is just an increasing crisis of humanitarian condition. And that, to me, is just where I tend to come from on this issue.”

Hoover then pressed Ocasio-Cortez, “You use the term ‘the occupation of Palestine.’ What do you mean by that?”

The 28-year-old socialist struggled, “Um… I think what I meant is … like … the settlements that are increasing in some of these areas and places where Palestinians are experiencing difficulty in access to their housing and homes.”

Hoover: “Do you think you can expand on that?”

Ocasio-Cortez fumbled, “Yeah… I mean, I think … I’d … also just— I am not the expert on geo-politics on this issue.”

When pressed on what she meant she struggled to give an answer and then admitted she does not know what she is talking about. pic.twitter.com/e3Uq1eupD3