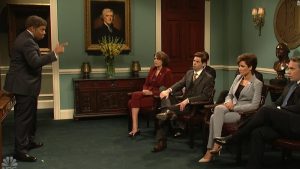 From the moment a second Virginia statesman admitted to wearing blackface in the 80s, the whole debacle became an SNL skit waiting to happen.

That is, because the time-honored sketch comedy show is still capable of producing the occasional funny skit amid the sea of yawn-worthy leftist propaganda.

Perhaps there’s hope for America yet.

The sketch takes aim at the recent scandal in Virginia involving Governor Ralph Northam and an uncovered yearbook photo on a page dedicated to the future Democrat politician which pictured a man in blackface standing next to a man in a KKK robe.

Northam originally apologized for the photo, then walked it back, saying he was certain he wasn’t in the photo but oh yeah, by the way, he did darken his face as part of a Michael Jackson for a dance contest during the 1980s, and yes, he may still be able to moonwalk, but that’s not really appropriate to discuss right now.

Stunningly, as his Lieutenant Governor Justin Fairfax was Kavanaugh’d in the wake of the scandal, Virginia’s Attorney General, Mark Herring, also admitted to wearing blackface.

Apparently, this was a big thing among future Democratic politicians in Virginia in the 1980s.

Quick note: this all started two days after Northam openly advocated for the murder of newborn babies as part of a now-failed bill to loosen restrictions on late-term abortions in Virginia.

Lest we forget the greatest scandal here.

At any rate, on a far lighter note, SNL did a pretty good job mocking the scandal-ravaged state over the weekend, joking that if you get a group of lawmakers in a room together, eventually, they’ll all admit to wearing blackface.