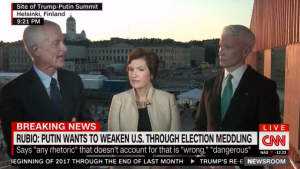 A few weeks ago, the left was comparing ICE detainment facilities on the Southern border to literal Nazi death camps, and now, they’ve compared Trump’s poorly-received press conference with Putin to Pearl Harbor.

I don’t know about you, but these comparisons seem ever-so-slightly hyperbolic to me.

While the President’s performance at the Helsinki presser was classic befuddled Trump, there was pretty much no way the press wasn’t going to rile up a Pearl-Harbor-sized (see what I did there?) brouhaha over it.

The media has been positively giddy/hysterical that Trump and Putin were even in the same room together, let alone feebly attempting to be diplomatic and genial for the cameras (like literally every other meeting ever between two heads of state with cameras present), so they’re absolutely determined to milk the bad press conference for all its worth.

That being said, MSNBC guest Jill Wine-Banks’ comparisons between the press conference and a foreign attack that resulted in the loss of over 2,300 lives and initiated the US’ involvement in WW3 was definitely a stretch.

How much longer will the left continue to make such ridiculous, dramatic statements before they realize they lose credibility every time?

Love him or hate him, it’s not hard to make reasonable, nuanced criticisms of President Trump–the presser wasn’t great, pretty much everyone agrees.

But comparing it to the deadliest attack on American soil and one of the key historical events in recent military history?

If they ever want to warn us about something really threatening, who will even listen?