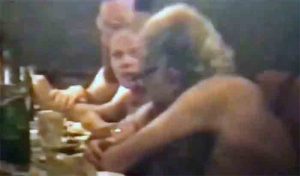 Amid all the Russia hype, who would have thought this would be the first grainy, damning video to surface in the lead-up to 2020?

Sanders, who actually has a lot more ties to Russia than Trump, like, old-world Soviet Russia, famously spent his honeymoon there just after marrying Jane Sanders in 1988.

Of course, many in his base wouldn’t hold this against him, but he was nonetheless heavily criticized for his USSR honeymoon during his bid for the Democratic nomination in 2016 by the 10% of Democrats who aren’t full-on Soviet-style communists (kidding. At least I hope.)

Now, as Sanders likely prepares another presidential run, a video of that trip has surfaced, of Sanders, shirtless, drunk, and singing with a bunch of presumed Soviets.

Bernie and Jane on their honeymoon in Russia singing “This land is Your Land” with their Russian comrades!!

Trigger Warning: Bernie is sitting at a table shirtless in his briefs. So are most of the rest of the men… pic.twitter.com/2DPyDY2WV0

While in 2016 Sanders didn’t stand a chance against the Pantsuited Ice Queen’s ascension to the throne, in 2020, he just might be the best shot Democrats have at usurping Trump.

And while the Democrats have been tirelessly digging for Russian dirt on Donald Trump for well over two years, they’re unlikely to find anything on Trump that comes close to this video.