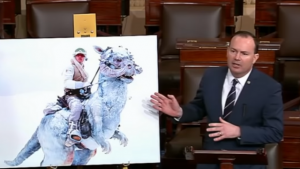 So, if you haven’t been following the fate of the hilarious/dangerous Green New Deal proposed by Alexandria Ocasio-Cortez and…well, let’s face it, no one else knows who anyone else behind this stupid thing really is except that obnoxious socialist chick we just can’t stop staring at, like a bad car wreck.

Speaking of car wrecks, that’s pretty much what the Green New Deal is, except that it would ban like, everything powered with fossil fuels and send us back into the stone age in about 5-8 years.

On Tuesday, the Senate voted on whether or not to debate the atrocious proposal which, in all seriousness, outlined a 10-year plan to dismantle the entire energy sector of our nation, eliminate air travel, rebuild every structure in the United States, and somehow ban cow farts.

In a move designed entirely to highlight the absurdity of the resolution, Senate Majority Leader Mitch McConnell proposed the vote, which failed miserably.

How bad? LITERALLY NO ONE VOTED FOR IT, with the majority of Democrats weakly voting “present.”

The vote did not go by, however, without Sen. Mike Lee stealing the show with some absolutely amazing graphics of what the world would be like were the Green New Deal actually implemented and I promise you, it is the absolute best thing you will see all day.