WATCH: Sen. Feinstein Thinks She’s Got Kavanaugh on Guns, Has No Idea What She’s Talking About 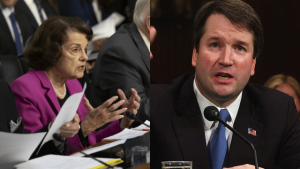 Welcome, to the grand kabuki spectacle that is the Kavanaugh Confirmation Hearing!

It’s been as dramatic as one could have expected, and more, as Democratic senators do everything they can to prevent the inevitable: Kavanaugh’s confirmation.

There is, of course, nothing they can do, because, thanks to their own Harry Reid, there are only 51 votes required to confirm a judge and–woops!–Republicans have it this time around.

Still, midterms are coming and they are using the opportunity during the apocalyptic press coverage of the proceedings to flex their hysterical, progressive muscles and get some empowering sound bites, which will, most likely, exclude Kavanaugh’s response.

That will certainly be the case if anyone cheered at Sen. Feinstein’s attempt to school Kavanaugh on guns yesterday when she quickly revealed she had absolutely no idea what she was talking about.

Or at least, she’s relying on her supporters to have no idea what she was talking about, which is, granted she’s from California, most likely the case.

According to National Review‘s David French, Feinstein should have known better:

“A number of Democrats are well aware that if an assault-weapons-ban case is heard by the Supreme Court, then the ‘common use for lawful purpose’ standard is likely going to dictate the case. If it does, most assault-weapons bans will likely fall. After all, the AR-15 and its variants are the most popular rifles in America today, owned by millions of Americans yet rarely used in crime,” he says.

Nonetheless, she pursued the false narrative that “assault weapons” are not “in common use”, despite the fact, which Kavanaugh quickly explained, that semi-automatic handguns and rifles are in widespread use across the nation:

Feinstein continued by claiming that “assault weapons are not in common use.”

“You’re saying the numbers determine common use?” Feinstein replied. “Common use is an activity. It’s not common storage or possession, it’s use. So what you said is that these weapons are commonly used. They’re not.”

“They’re widely possessed in the United States, senator,” Kavanaugh replied. “And they are, they are used and possessed.”

I would certainly consider keeping an AR-15 in one’s closet in the event that one should ever have to, Lord forbid, defend their family against a home invader to be a very good “use” of the AR-15, wouldn’t you?

As Kavanaugh said, millions of homes across America “use” “assault weapons” in this way.