WATCH: ‘Saturday Night Live’ Cast Moms Harp on Their Kids for “Too Many Trump Jokes” 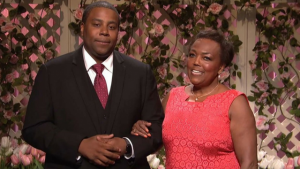 The mothers of the cast of Saturday Night Live, the once-great live comedy show that has spiraled into a pit of humorless Trump bashing over the last year have slightly redeemed their children in the public eye by offering them some valuable–and hilarious–advice on Saturday’s show.

Taking to the stage with their respective progeny, several SNL cast moms took the opportunity to scold the show writers for their boring and Trump-centric material as of late.

Luke Nell, brought out his mother Cindy, to whom he said “Mom, I love you because you always give me the best advice.”

Clearly, Cindy does, because she replied “Thanks, Luke. Here’s some more: Enough with the Trump jokes.”

“Mom, I don’t write those,” he objected, to which Cindy added, “And why doesn’t ‘SNL’ ever talk about crooked Hillary!?”

“Mom, I’m so new here, please do not do this to me,” Nell said as they exited the stage.

Colin Jost’s mother, while she gave Alex Baldwin credit as he “does a great Trump impression,” added, “but why does it have to be so mean? Who writes that stuff?”

“Yeah, I don’t know,” Jost replied. “I guess it’s mostly Michael Che,” he suggested, who is his “Weekend Update” co-host.

One mother went beyond criticizing SNL and right to the Democrats and the Mueller investigation itself:

“Remember, I was in that production of “The Crucible” in high school?” said Mikey Day to his mother, Sylvia. She replies, “Yeah, you know ‘The Crucible’s’ a lot like the witch hunt against President Trump.”

But Chris Redd’s mother had by far the best comment, reminding the cast and audience and all of America exactly Who we really should be paying attention to:

“I’m new and I’m black, so be cool,” Redd urged his mother as they took their place on stage, only to be quickly put in his place by mama:

“I don’t understand why everyone’s focused on Trump at all when you should be focused on Jesus,” she said.

“And that’s the problem!” she said.

Well, hallelujah and an amen to that, mama!

Good on SNL for letting these wise mothers get their say in.