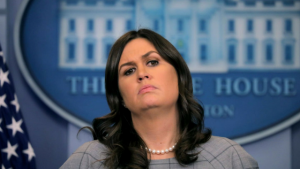 We sure are glad to hear that Sarah Sanders is staying in the White House after CBS ran a fake news story declaring she would soon be departing.

Because who else can put attention-hog Jim Acosta in his place quite as well as Sarah?

During Thursday’s briefing, Acosta, in typical Acosta fashion, kept interrupting the Press Secretary and trying to bait her into the sound bite he wanted.

She wasn’t having it.

“I know it’s hard for you to understand even short sentences,” she shot back as he tried to twist her words on illegal immigration and Jeff Sessions’ recent comments on the Bible and enforcing the law.

The Daily Wire explains what went down:

he exchange began with Acosta speaking of children separated from their families as they come across the border. He said, “The Attorney General earlier today said somehow there’s a justification for this in the Bible. Where does it say in the Bible that it’s moral to take children away from their mothers?”

Sanders replied, “I’m not aware of the Attorney General’s comments or what he would be referencing. I can say that it is very Biblical to enforce the law. That is actually repeated a number of times throughout the Bible. (Acosta interrupts) Hold on, Jim, if you’ll let me finish — again, I’m not going to comment on the Attorney’s specific comments that I haven’t seen.”

Acosta snapped, “You just said it’s in the Bible to follow the law.”

Sanders fired back, “That’s not what I said; I know it’s hard for you to understand even short sentences , I guess, but please don’t take my words out of context, but the separation of alien families is the product of the same legal loopholes that Democrats refuse to close, and these laws are the same that have been on the books for over a decade. The President is simply enforcing them.”

Epic burn in the midst of some serious truth.

See, the thing about these press briefings and the way the left-wing media narrative works is that it doesn’t matter so much what is true as not, as long as they can tug on the bleeding heartstrings of their progressive audience.

The tragedy of parents being separated from their children at the border has been a favorite talking point lately, and it is embarrassingly devoid of any recognition of reality, like the fact that it’s due to Democrat policies the families are separated at the border in the first place, and that there was a conspicuous silence from their side for eight years as the Obama administration separated families, not to mention, essentially “lost” thousands of children.

So, Sanders had a little something to say about this too:

Acosta, ignoring the need to enforce the nation’s laws and making an emotional appeal: “Can you imagine the horror that these children must be going through when they come across the border and they’re with their parents and suddenly they’re pulled away from their parents? Why is the government doing this?”

Sanders said bluntly, “Because it’s the law, and that’s what the law states.”

Acosta, eager to flout the law: “It doesn’t have to be the law. You guys don’t have to do that.”

Sanders put the blame squarely where it belonged: “You’re right. It doesn’t have to be the law, and the President has actually called on Democrats in Congress to fix those loopholes. The Democrats have failed to come to the table, failed to help this President close these loopholes and fix this problem. We don’t want this to be a problem; the President has tried to address it a number of occasions; we’ve laid out a proposal and Democrats simply refuse to do their job and fix the problem.”

This was an epic mic drop moment, of course, or at least it would have been if Jim Acosta could understand so many long sentences.

The exchange begins at 4:33