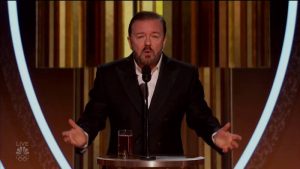 While I’m clearly no compatriot of raging atheist Ricky Gervais, I am definitely a fan of leftists calling out their fellow leftists for going too far in the “woke” department.

At his fifth and final Golden Globes hosting gig, the British comedian railed against an entire roomful of Hollywood elitists. It was a beautiful sight to behold.

Gervais began, according to The Hollywood Reporter:

You’ll be pleased to know this is the last time I’m hosting these awards, so I don’t care anymore. I’m joking. I never did. I’m joking, I never did. NBC clearly don’t care either — fifth time. I mean, Kevin Hart was fired from the Oscars for some offensive tweets — hello?

Gervais was clearly signaling to his own brilliantly on-point and scathing tweets regarding the transgender-mania sweeping the globe right now. Like this one, referring to Jonathan “Jessica” Yaniv, the transgender Canadian lobbing discrimination lawsuits at every woman in the province who refuses to give his male genitalia a brazilian wax:

How did we get to the point where women are having to fight for the right to choose whether they wax some big old hairy cock & balls or not? It is not a human right to have your meat & 2 veg polished.

Pardon the language, but the guy’s got a point.

Gervais carried on with his monologue:

Lucky for me, the Hollywood Foreign Press can barely speak English and they’ve no idea what Twitter is, so I got offered this gig by fax. Let’s go out with a bang, let’s have a laugh at your expense. Remember, they’re just jokes. We’re all gonna die soon and there’s no sequel, so remember that.

Remember, folks, Gervais’ identity as a “godless ape” comes up fairly often, so take it for what it’s worth.

Gervais took a few pot-shots at celebrities like Felicity Huffman, who was briefly jailed for bribing her daughter’s way into college, veteran actor Joe Pesci who, Gervais noted, bears a striking resemblance to “Baby Yoda,” and the cast of the abominable Cats remake (which is too gross to even paraphrase here.)

Gervais even found a brilliant way to weave an Epstein meme joke into a shameless plug for his own Netflix show:

No one cares about movies anymore. No one goes to cinema, no one really watches network TV. Everyone is watching Netflix. This show should just be me coming out, going, “Well done Netflix. You win everything. Good night.” But no, we got to drag it out for three hours. You could binge-watch the entire first season of Afterlife instead of watching this show. That’s a show about a man who wants to kill himself cause his wife dies of cancer and it’s still more fun than this. Spoiler alert, season two is on the way so in the end he obviously didn’t kill himself. Just like Jeffrey Epstein. Shut up. I know he’s your friend but I don’t care.

Did he just call a whole stack of Hollywood elites beneficiaries of Epstein’s pedophilia ring? ‘Cause it sounds an awful lot like he did, and if so, he deserves a medal for it.

Gervais finished his monologue with a scathing reprimand of the lefty elitists in the room for claiming moral high ground over the rest of society when, clearly, they’ve done nothing to deserve it:

It’s the last time, who cares? Apple roared into the TV game with The Morning Show, a superb drama about the importance of dignity and doing the right thing, made by a company that runs sweatshops in China. Well, you say you’re woke but the companies you work for in China — unbelievable. Apple, Amazon, Disney. If ISIS started a streaming service you’d call your agent, wouldn’t you?

So if you do win an award tonight, don’t use it as a platform to make a political speech. You’re in no position to lecture the public about anything. You know nothing about the real world. Most of you spent less time in school than Greta Thunberg.

Gervais concluded his monologue with a rather punk-rock send-off, urging winners not to waste time giving lengthy political platitudes for acceptance speeches, suggesting that they simply “come up, accept your little award, thank your agent, and your God and [expletive deleted] off, OK? It’s already three hours long. Right, let’s do the first award.”

Needless to say, Gervais owes quite a bit to the swear jar, and his absolute loathing of the God who created him is nothing to celebrate, but my goodness is it just a breath of fresh air when uppity Hollywood elites get their asses handed to them.

Watch the full monologue here, and watch to see which folks can take a joke and who got triggered: