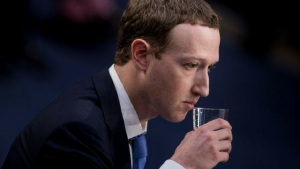 It’s no secret that Facebook is completely biased against conservatives. The left might be clutching their pearls over the recent Cambridge Analytica scandal that they think somehow won the election for Trump (they’ll blame anything other than Hillary being an insufferable, corrupt witch no one liked!), but conservative commentators and media outlets know better.

For content creators who rely on their organically grown Facebook audience to direct traffic to their sites and hence earn an income to support themselves, this has been a serious setback, not to mention, a frustrating example of what can happen when those who wield this much power over the flow of information lean left!

So it was satisfying to see during Zuck’s high-profile appearance before the House Energy and Commerce Committee that at least one elected official was willing to grill him on this blatant bias and suppression of free speech on his massive social network.

“I know some of the people that work for Facebook, Campbell Brown said, for example, ‘This is changing our relationship with publishers and emphasizing something that Facebook has never done before: it’s having a point of view,'” started House Majority Whip Rep. Steve Scalise, whose name you might recognize from the assassination attempt he survived last year (it is worthy of note that Scalise is still an outspoken proponent of the Second Amendment!)

Scalise brought up the recent removal of the popular Trump-supporting comedy duo, Diamond and Silk, whose Facebook page was removed this month and deemed “unsafe” but the network’s Thought Police.

Zuckerberg, the Daily Wire notes, had no response and, as he has done frequently this week, promised Scalise he would “follow up with you on that.”

“I do want to ask you about a study that was done dealing with the algorithm that Facebook uses to describe what is fed to people through the news feed,” Scalise continued. “And what they found was after this new algorithm was implemented that there was a tremendous bias against conservative news and content and a favorable bias towards liberal content, and if you can look at that, that shows a 16-point disparity, which is concerning.”

Zuck tried to flat-out deny a “directive” to put a bias “in anything that we do,” but cold hard evidence proves otherwise.

“Overall, since mid-February, when Facebook implemented its new ‘trusted sources’ algorithm — which CEO Mark Zuckerberg has described as an attempt to clamp down on ‘sensationalism, misinformation and polarization’ — the study found that most conservative sites have seen a significant drop in traffic, while most liberal sites have seen little impact,” reported The Daily Wire last month. “The study tracked 50 sites (25 conservative, 25 liberal) known to have significant Facebook traffic. The conservative sites saw a 14% decrease in traffic on average. When Fox News, one of the only conservative-leaning sites to see an increase in traffic since the changes, is excluded from the list, the average decline is far more dramatic. Meanwhile, the 25 left-leaning sites included in the study saw a 2% increase in traffic by average.”

“You have 20,000 people that work on some of this data analysis. If you can look and see if there is a bias and let us know if there is and what you’re doing about it, because that is disturbing when you see that kind of disparity,” Scalise said.

WATCH Scalise say to Zuck what we’ve all been wanting to say: we know you’re censoring conservatives!!