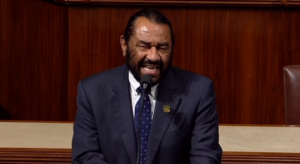 The House is so full of Democrat nutballs this year that it can be quite a challenge to stand out.

Between feisty knucklehead AOC and her hot-headed Muslima counterparts, Rashida Tlaib and Ilhan Omar, and the fervent, party-wide support for killing babies and open borders, your average leftist in Congress has to really fight to make noticeably outrageous comments.

But Rep. Al Green is up for the task.

While voting to not keep Americans safe, Green (D-TX) pontificated gloriously about the utterly non-sensical reasons as to why he supported the resolution to block the President’s national emergency declaration of the humanitarian crisis at our southern border, asserting that Trump should be impeached because border security is bigoted or something.

He also admitted that while the Trump presidency has seen record-low African American unemployment and groundbreaking prison reform, which is really great, Trump is still a total sexist/racist/homophobe/xenophobe/insert-your-phobe-here.

Oh, and he very poorly chose his words when denouncing the separation of “babies from mothers” on the very same day that his Democrat counterparts in the Senate literally voted down protections for babies born alive after botched abortions.

So there’s also that.

Green said, “And still I rise. And I rise today with love of country in my heart and a belief that the record has to be set straight. The record has to always reflect the truth, and there is a truth that is being obscured. I want to set the record straight because there seems to be a belief that if you have committed acts of bigotry, if you have been a racist, if you have been engaged in homophobia, xenophobia, Islamophobia, if you do one thing, somehow that thing will eradicate and eliminate all of the bigotry that you have perpetrated. I rise to correct the record because I want the record to show that at least one person came to the floor of this Congress and made it clear that, yes, unemployment may be low for African-Americans, yes, it may be low, but it’s still twice that of Anglo-Americans, generally speaking. Yes, you may have signed a bill to deal with some aspects of criminal justice in a just way, and that’s appreciated. But there’s still more work to be done. But notwithstanding the fact there’s more work to be done, it’s still appreciated. But the record has to be set straight. And here is what the record should show; that does not eliminate the bigotry emanating from presidency. Eliminating bigotry does not occur because you signed one bill. It does not occur because unemployment is low. It does you have to do more than simply sign a bill.”

He continued, “And I am not saying to you than an apology is in order. I tell people, tell the truth, just tell the truth. Say I was wrong when I instituted a policy that separated babies from their mothers. That emanates the type of bigotry we don’t condone in this country. Say I was wrong when I said there was good people among those who were the racists, the bigots, the xenophobes and homophobes in Charlottesville. Say I was wrong when you don’t have to be so kind when you are part of the constabulary, you are part of the policing force in this country. Just say you were wrong if you want to atone. Signing bills won’t do it. Going to church won’t do it. Asking forgiveness will cause you to be forgiven, and I will forgive you, but that doesn’t mean you will no longer be sanctioned for your bigotry. I want to thank those who have stood and made their points clear as it relates to bigotry. I’m listening to these morning programs now. They’re all talking about bigotry emanating from the presidency, not necessarily in those words. They’re talking about the racism that the President perpetrates. I appreciate what they are saying. But we got to do more than talk about it. We cannot allow a president to remain in office who has engaged in this kind of bigoted conduct.”

He added, “It is time for us to take a stand here on the floor of the House of Representatives. There were no fine people in Charlottesville. You ought not separate babies from their mothers. You ought not have policies that would condone bigotry and encourage others to engage in it. I believe that we have a duty to take a vote. And at some point in the near future we will take another vote, notwithstanding the Mueller report. I yield back the balance of my time.”